The Geometry of the Vegetable Garden

March 29, 2011
A few answers to some questions about my vegetable garden.

How big is it?

Follow along and I’ll tell you how big it is.

For those who studied geometry “some time ago”, a refresher on shapes…

My vegetable garden is four-sided, so it is technically a quadrilateral, which is what any four-sided shape is called. (Are you starting to get a little nervous that there might be a quiz, like in school?)

Because two sides of the garden, the north side and the south side, are parallel, my quadrilateral shaped garden is technically a trapezoid. Because the other two sides, which aren't parallel, are the same length, it is actually an isosceles trapezoid. If I remember high school geometry correctly, I think the sum of the four interior angles should be 360 degrees, but I won’t swear to that.

So what is the area, in square feet, of an isosceles trapezoid, given that the two parallel sides are approximately 50’ and 67’ and the other two sides, which are not parallel, are about 23’ feet each? (I use “approximately” and “about” deliberately because I measured quickly which means I could measure again and end up with completely slightly different measurements.)

Get out your protractors, slide rulers, and scientific calculators!

Or figure out the answer the way I did.

There is a rectangle within that isosceles trapezoid that is 23’ x 50’, approximately, which is 1,150 square feet.

That leaves two triangles, one on each end of the garden that if you put them together to form another rectangle, that rectangle would be about 23’ x 8’, roughly, maybe, am I thinking about this in the right way? That’s about another 174 square feet, which I’ll round to 175 square feet.

That’s a nice size for a vegetable garden, if I do say so myself.

What about that apple tree in the center of the garden?

Why did I plant that apple tree there? It made sense at the time to plant it in the approximate center of the garden, but now that I see the clean slate that I have, the apple tree seems to be in the way. I don’t like it there, and it has never produced any decent apples.

It’s time to invoke one of the secrets to achieving happiness in your garden, the first secret.

Do you remember what it is?

Grow the plants you love.

(Aren’t you all lucky I’m not making you take a quiz?)

I don’t love that apple tree or the variety of apples it should produce.

Don’t look. Turn your head if you are squeamish.

It will take just a few minutes to cut down that little apple tree with my reciprocating saw.

Then the entire 1,325 square feet, give or take, of vegetable garden space will truly be a clean slate.

(We garden fairies just added this picture to this post.  Why Carol didn't include it, we'll never know!) 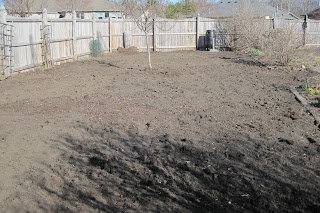 By the way, Dr. Hortfreud says that this garden is .030417 acres... in other words 3% of an acre. That makes it seem very tiny. It's all relative, she says.
vegetable garden