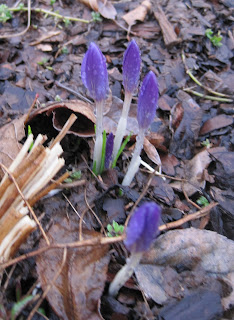 I can hear the rallying cry spread from crocus to crocus on these rainy days. Close up! Protect the pollen!

By any means, protect the pollen.

So how does this happen, this closing of crocus blooms on cloudy, rainy days?

There are probably some scientific theories about why and how flowers close, debated no doubt in the halls of great agricultural universities. But here in my garden, when I don’t remember or know why or how, I usually credit or blame the garden fairies, depending on the situation.

I imagine the garden fairies scurrying about closing up the crocuses to protect the pollen from the rain. Oh my! The commotion that ensues in the garden as they run from one crocus to another, shouting back and forth as the wind picks up, “I’ve got this clump, go over there and close those.”

“Don’t forget the ones in the lawn!”

And on and on they go until they have closed up all the crocuses throughout the garden.

Whew, what a job!

Fortunately, the newly blooming Irises, which chose a rainy day to open, do not need to be closed up to protect their pollen, which is presumably buried deep down in the flowers.

Some of those blooming in yesterday’s rain included Iris histrioides ‘Katherine Hodgkins’, 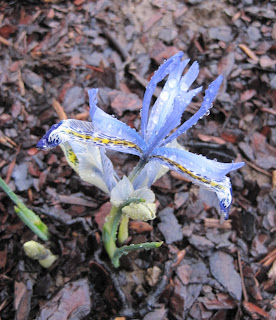 and Iris reticulata ‘Confab’ (maybe, could be another variety) 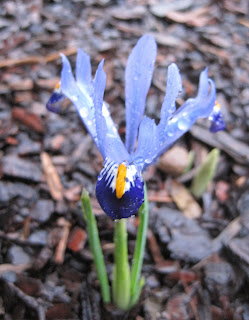 It is important for flowers to protect their pollen by whatever means they have available to them. Their very survival depends on that pollen!

According to The Standard Cyclopedia of Horticulture edited by Liberty Hyde Bailey (The Macmillan Company, 1915), page 1240,

“Most pollen is injured by exposure to rain and dew. The grains tend to swell and burst owing to the excessive osmotic pressure. It is for this reason that pollen when studied or germinated in the laboratory must be mounted in a sugar solution approximating the density of the stigmatic fluid. It is not a surprise therefore to find that nature has protected the pollen of many flowers from rain by structural means. Thus bell shaped hanging flowers, salverform corollas with a small eye which requires pressure to force a drop of water in, closed corollas of the snapdragon type, beard in the throat flowers that droop only in wet weather, flowers that close up during rain and many other contrivances are adaptations in part at least for the protection of the pollen.”

Well, clearly that should be called fairynasty.

(Garden fairies here... We garden fairies do not want you to know we close up the crocuses when it rains. It takes away from our reputation for being lazy overall if you know about all the stuff we do in the garden. Forget you read this.)
bulbs fairies spring