April 06, 2011
Garden fairies here! We garden fairies hope you fine folks get all excited when we decide to post because you should know by now that we are going to spill the beans on what's really going on around here.

We garden fairies have to hurry this morning because there are just a few minutes before Carol shuts down this laptop and goes to work, so we'll have to make this short and to the point.

Anyway the point is, we garden fairies have something important to tell you all about what is really going on around here at May Dreams Gardens, but now we've almost forgotten what that point was.

Oh, right! We garden fairies have noticed that it is already the sixth day of April and Carol has not started her tomato, pepper, or eggplants from seed yet!

Shocking, we know, so we garden fairies will give you all a moment to let that sink in.

We think what happened is that she had someone come in and paint the sun room, which is where she starts all her seeds and so she waited until he was done to get started on the seeds. Then the room was a wreck and she had to put everything back.

We garden fairies thought it was hilarious when Carol moved that ginormous night blooming cereus in the corner and it started leaning like it was going to fall over.

Well, it didn't fall over because Carol trimmed it all back. Just look at all this mess on the floor! 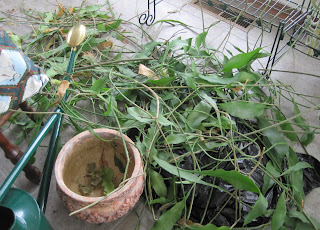 We garden fairies were a bit nervous that there might be a tree fairy or two in there and they might get thrown out when Carol cleaned it all up, but we counted tree fairy noses and everyone was accounted for.

Whew, that was a close call! 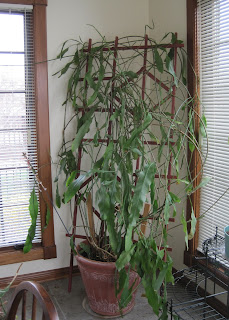 We garden fairies thought for sure once she finished that big job she'd sow those seeds, but she did not! I know,  we are shocked, too.  Carol always starts her tomatoes, peppers, and eggplants from seed.

Now we believe that she is not going to sow those seeds at all this year, but instead she is going to buy her tomato, pepper, and eggplant plants. "Eggplant plants"... we garden fairies think that is so funny to write that.

Anyway, that is good news for the garden centers and the seed sellers, too. It sort of means that Carol bought them twice, unless she saves those seeds for next year.

Oh, well, we are garden fairies. We can not, will not, and do not concern ourselves with the finances around here! What we are most concerned about is that the tree fairies who came in at Christmas time with the Christmas tree and then stayed on through the winter in the sun room, where most of the houseplants are, often hide amongst the tomato seedlings for a free ride out of the sun room in the spring time.

How will they get out now?

We just hope when Carol buys her seedlings that she puts them in the sun room for even a few hours, to give the tree fairies a chance to get a free ride out of there.

Fairegarden said…
Dear Garden Fairies and perhaps Tree Fairies, that does sound like the perfect plan. Let us all try to persuade Carol to put those little plants in the sunroom for protection before planting them outside. That way all will be well.
Your friend,
Frances
Wed Apr 06, 07:23:00 AM 2011

Dee/reddirtramblings said…
Busy time inside the house even without growing any seedlings. Hope things get back to normal soon for you fairies.~~Dee
Wed Apr 06, 08:03:00 AM 2011

Mr. McGregor's Daughter said…
The best laid plans of mice and fairies...I wonder what other surprises and changes this year of transition holds for May Dreams Gardens? But once it's all done, it will be wonderful.
Wed Apr 06, 08:42:00 AM 2011

Karin / Southern Meadows said…
Silly Garden Fairies tattling on poor Carol who sounds like she has been very busy indeed! :0)
Hopefully your little friends will find their way out of the sun room for the summer.
Thu Apr 07, 07:40:00 AM 2011

Gail said…
Garden Fairies~Just whisper your requests/suggestions in Carol's ear while she's sleeping. I am sure that will work and the Tree Fairies will have transportation to the great outdoors. gail
Thu Apr 07, 07:51:00 AM 2011

Kate @ Gardening and Gardens said…
Thanks for your post Garden Fairies. Always a pleasure to hear from you and get the real scoop of what's going on!
Thu Apr 07, 09:59:00 AM 2011