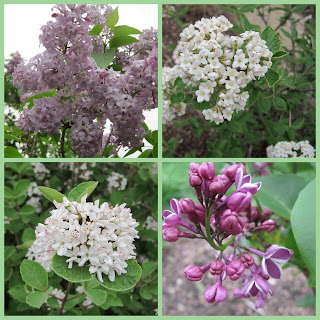 Finally, with the first lilacs just beginning to bloom and the early blooming Viburnums still hanging on, I had the perfect opportunity to smell each one and decide, once and for all, which flower smells the best.

I ran from shrub to shrub, from bloom to bloom, earlier today, carefully smelling each one, in between breathing fresh air to ensure that the scent of one bloom was not still in my noise when I moved on to the next one.

Without a doubt, the best smelling bloom amongst all four of these shrubs is...

Garden fairies here! We are hijacking this blog because we have some very big news to share!

Our own Thorn Goblinfly got a package in the mail!

It was delivered by the postman. This is exciting in two big ways.

First, all those who doubt the existence of garden fairies should now watch Miracle on 34th Street. We garden fairies will absolutely use the same defense that Santa Claus used when people said that he did not really exist.

Here is the package, clearly addressed to Thorn Goblinfly, who we all know is a garden fairy. 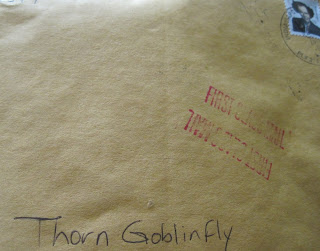 We garden fairies spent quite bit of time studying this package, wondering what could possibly be in it and who it was from. We even noticed there was a lady on the stamp on it. 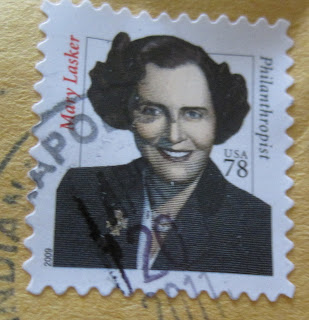 We are garden fairies, we are curious. We wondered who she was and why she was on the stamp on Thorn's package.

We garden fairies looked her up and found out that she was a philanthropist and we quote, "LadyBird Johnson wrote about Lasker numerous times in her book A White House Diary, calling her house "charming ... like a setting for jewels" and thanking her for gifts of daffodil bulbs for parkways along the Potomac River and for thousands of azalea bushes, flowering dogwood and other plants to put along Pennsylvania Avenue".

Anyway, fascinating as all that is, we garden fairies finally opened the package to reveal... 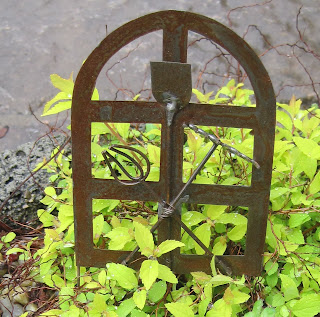 With garden tools on it!

We garden fairies immediately set it up in a container planting that includes the tiny, garden fairy sized spirea, Spiraea japonica 'Golden Elf'. (We are garden fairies, we think that is the name of that little shrub but we are not sure.)

Then we set it up and took pictures of it in various locations all over the garden. 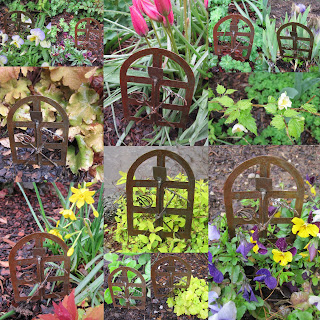 We are garden fairies and could not decide where to put it. In fact, several garden fairies, including Sweetpea Morningdew and Limeleaf Greengrass almost got into an actual fight over the location.

But we are garden fairies. We do not fight like that!

Finally, Thorn herself decided that her new gate should be put in the miniature garden, the very one that got uprooted with all the garden design changes and has not yet been replanted. We are now organizing ourselves to make known to Carol that she must plant the new miniature garden at once or there will be trouble in the garden!

Then we will set up our new gate, with tools on it, in the newly planted miniature garden and be the envy of garden fairies near and far.

Humbly, yet excitedly, submitted by,
Thorn Goblinfly, Chief Scribe and First Garden Fairy Ever to Get Mail

(P.S. We apologize to Carol for hijacking her blog. We only did so because of the importance of our big news and also to keep her from making the mistake of choosing one bloom over another when it comes to scent. We are garden fairies. We will just tell you that they all smell equally nice.)

(P.S.S. We garden fairies have very poor manners as a rule and almost forgot to thank the person who sent Thorn the package. Thank you to the Hort-Enabler, the Hoosier Gardener!)
fairies humor