The Gardener and the Mighty Dandelion 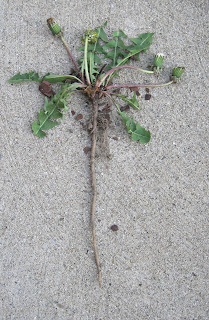 There in the garden, the wild dandelion was trapped, cornered, easy prey for the gardener, who swooped down upon it and with her bare hands pulled it out of the rain-softened earth.

She was delighted at her kill, how long the root was! Ah, sweet victory!

She flung the dandelion to the sidewalk to bake unprotected in the late afternoon sun. It was at least a four-pointer, measured by the number of blooms. She considered for a moment that perhaps it should be dried beneath a heavy pile of her best gardening books and then mounted on the wall for all to see how adept she was at pulling out that dandelion.

But she was no fool, this dandelion-pulling gardener. She knew not to brag, for even trapped and cornered throughout her garden, she knew that not every dandelion would give up so much root so readily, bare-handed or with digging tools.

She knew that the best she could do in her hunt for the mighty dandelions was to thwart each one by attempting to pull it, hoping for at least some root loss to slow it down.

For she knew that for every dandelion trapped in her garden, millions of other dandelions lived unfettered in the wild, casting a thousand seeds on a single breeze, hoping to send their offspring to whatever garden was near or far.

She had even heard that some gardeners attempted to domesticate dandelions, to plant them willfully and purposely in their gardens, where they would grow them to enormous sizes just to eat the leaves or make a little dandelion wine.

None of that nonsense for this gardener! She considered the dandelion to be best viewed in the wild and continued her daily quest to thwart those that attempted to move in on her garden, to slow them down, wear them out by pulling them, and pulling them, and cutting off their blooms.

She knew she’d never win completely, that the dandelions would always return from their roots or be replaced by tiny seedlings.

Yet still she paused and hovered over the dandelion on the sidewalk, admiring her kill, feeling victorious for a brief moment, confident that at least this one dandelion would not return again from its roots…
humor weeds