April 09, 2011
It is important to know if you have rabbits in or around your garden so that you can take precautions to prevent them from eating your lettuce before you get a chance to harvest it for yourself.

How do you know if there are rabbits around your garden?

Look for these signs:

Actual rabbits. Especially in the springtime, you may see rabbits early in the morning hopping around the garden.

Foliage half eaten off.  Tulip foliage and any expensive, rare perennial, plus tender new shoots in the vegetable garden, are favorite foods of most rabbits.

Less common but still a sure sign of rabbits is... 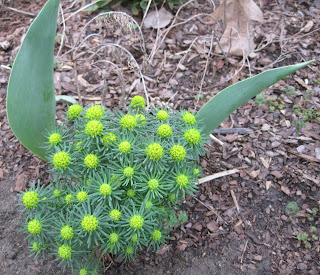 Notice how the two tulip leaves represent rabbit ears and the Euphorbia in between is shaped like the head of a rabbit.  This is the usual form of these rabbit ritual altars, though they can take other forms.

No one has ever seen or documented the actual ritual that the rabbits perform at these altars, but it is widely known that following the ritual, the rabbits gorge themselves on anything and everything in the garden and then carry on well into the night with near riotious rabbit merry making.

If you see something like this in your garden, there are definitely rabbits around!  Many rabbits!

Get out your plastic spoons and forks and arm yourself for battle!
humor rabbits