May 22, 2011
I have only one old-fashioned tall bearded Iris in my garden. It is growing in a bed on the west side of the house, next to some lilacs, where it has not bloomed for at least ten years. I was pleasantly surprised to see buds on it this spring.

I am just sure it was something I did that made it bloom!

But I know better. I did nothing to it, except move the peonies that were next to it. Next to it... but most assuredly not crowding it out.

When it finally bloomed, I was actually able to find the old package for it to determine that its name is 'Dawn of Change'.

It's a fitting name for this spring because as more of the garden design is taking form, it feels like the dawn of change in my garden.

Last fall I moved the peonies that were growing next to 'Dawn of Change' to a new bed in the backyard that runs along the fence. 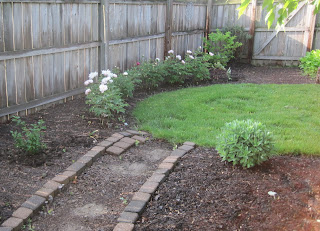 There I'll be able to enjoy them more because, well, they aren't stuck on the side of the house. I think subconsciously I originally choose that spot on the side of my house for the peonies because most of them were originally my Dad's, and he grew them in a bed on the side of his house.

It was the garden designer's suggestion to move them and it was a good idea. 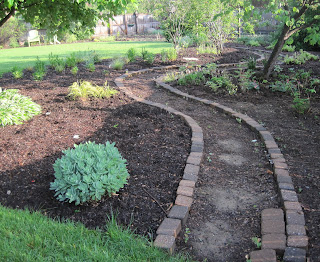 On the right side of the path, where the red bud tree (Cercis canadensis) is leaning, there is shade. Not a lot of shade, but shade nonetheless. I'm planting more shade loving perennials there and calling it Woodland Follies because if that red bud croaks, I'll look pretty foolish with all my shade loving plants in full sun.

It's hard to find good shade when your garden used to be a field.

On the left side of the path, the August Dreams Garden is starting to fill in.  The garden designer and her digging guy planted all those plants way back in April, luckily choosing what seemed like the only two days in April that were dry enough to do any planting.  August Dream Garden is designed and planted to have peak bloom in late summer, hence the name, and includes many native plants.

If you follow the winding path between Woodland Follies and August Dreams Gardens, you'll arrive at the Vegetable Garden Cathedral. 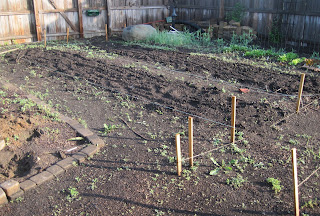 I've been working on the beds in the vegetable garden off and on as time allows and made some progress yesterday, but then we got another half inch of rain last night, so I've put that on hold for another dry day.  (For those who worry that it is getting kind of late to plant a vegetable garden, I assure you that it is not too late!)

The Vegetable Garden Cathedral will look a lot better in a few weeks when it is all cleaned up and planted up with vegetables and flowers, including the flowers that starred in my one act play, Life of A Marigold, now playing in a garden near you.

Meanwhile, over in Ploppers' Field, I've added a few perennials here and there. 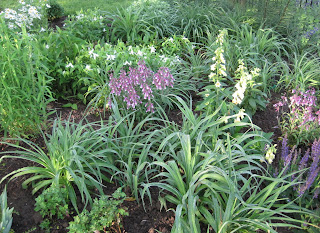 Any guesses as to which ones are new?

Well, it barely matters which are new and which have been there for awhile because it's May, and all of the garden feels new and fresh in May.

Some people may be rolling their eyes at the naming of gardens within a garden. So far, I have Plopper's Field, August Dreams Gardens, Woodland Follies, and the Vegetable Garden Cathedral.  It's actually easier to use those names than to say "over there" or "by that red bud" or "round yonder".  And a whole lot more fun.  Try it in your own garden!

Coming soon, an update on another garden area named The Shrubbery!
garden design