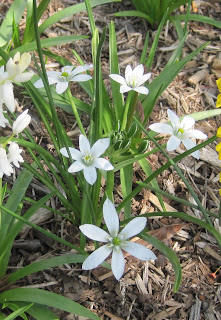 INDIANAPOLIS, IN -- On a quiet afternoon, Ms. Carol M. Indygardener was tending to her garden, mostly marking out new beds in the vegetable garden, when she noticed  a pretty, white, almost shiny flower amidst a group of other spring blooms in the garden she likes to call Woodland Follies.

In a bit of a rush, Ms. Indygardener did not at first recognize the bloom but later confirmed its identity after consulting with several gardeners online.  Ms. M. A., author of the popular blog Gardens of the Wild, Wild West, was the first to correctly identify it as Star-of-Bethlehem, Ornithogalum umbellatum.

She also told Ms. Indygardener, "I hope you like it cuz you are never ever gonna see the end of it."

Ms. Indygardener was horrified when she found out the identity of the bloom. She recalled immediately the blog for the Gene Stratton-Porter State Historical Site and their yearly battle to remove this plant which has spread throughout the gardens for over 80 years.

She told reporters, "I don't know where this flower came from.  I've searched all the receipts for my bulb orders from last fall and don't see it listed. Really, I would never order it because even though I didn't recognize it at first, I knew when I found out what it was that it was an invasive plant."

Ms. Indygardener later shared information about how the Purdue University Extension Service describes Star-of-Bethlehem as an invasive weed, now growing in 91 of Indiana's 92 counties.  In fact, it is listed on their "Most Wanted" Invasive Plant Pest List.

Following a sleepness night in which she said she had nightmares about seductive, invasive plants, Ms. Indygardener went out at first light and dug up the one Star-of-Bethlehem plant. She noted that it was at first difficult to see, hiding amongst the other bulbs with its blooms all closed up. 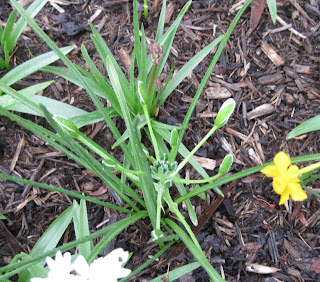 But she found it and dug it up on the spot without hesitation.

"No invasive flower like Star-of-Bethlehem is taking over my newly designed gardens", she told reporters. As evidence of a hopefully successful removal, she took pictures of the plant shortly after she dug it up and right before she unceremoniously threw it in the trash. 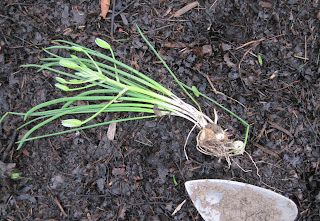 There was some speculation amongst various authorities as to where the bulb for the Star-of-Bethlehem might have come from and how it ended up in Ms. Indygardener's Woodland Follies garden. The current theory is that one bulb of the Star-of-Bethlehem may have ended up in a package of other bulbs purchased last fall, and blended in enough that Ms. Indygardener did not notice it when she hurriedly planted bulbs before the ground froze.

Asked if she had any words of wisdom for other gardeners after her ordeal, Ms. Indygardener responded, "We must always remain vigilant in our gardens. If we see a plant that we don't recognize and don't remember planting, we should find out what it is, because it might be bad."

(Reprinted from The May Dreams Gardens Gazette, circulation unknown, mostly read by the garden fairies while sitting on their porches after a big dinner. One fairy usually reads the stories aloud to all the others.)
bulbs humor weeds