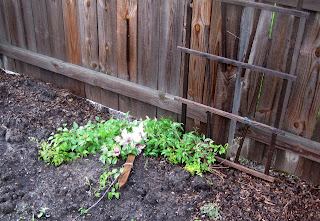 I had visions of a nice line up of Clematis vines along the back fence that borders the vegetable garden. The vines would grow up various and sundry trellises, that in and of themselves would be architecturally interesting, and provide color and interest throughout the season.

I started my little line up with three clematis that had to be moved for the garden design and three old trellises.

"How's that going for you, Carol?"

It is not going as I had planned, thank you for asking.

Clematis 'Pink Fantasy' pictured above, is refusing to climb up the trellis, even though when it was planted in the front yard, it climbed a trellis just fine.

With great authority and strong words, I have carefully, gently, yet firmly, lifted it up off the muddy ground and put it back on the trellis at least three times, if not twice. 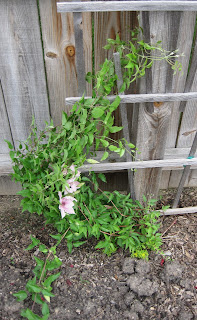 Now stay! And climb! And bloom some more while you are at it!

Then the minute my back is turned... 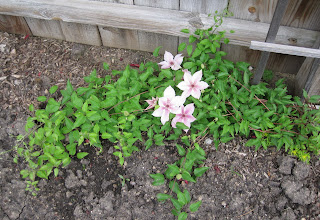 It's back on the ground again.  Did I just hear someone or some plant laugh?

That's how a shrub clematis behaves. I do not expect it to climb.

But Clematis 'Pink Fantasy' -- I expect it to climb.

What's a gardener to do when a clematis that should climb without the aid of clips, ties, or bondage of any kind, refuses to climb?

I am already beginning the process of disassociating myself from this clematis to prepare for its inevitable removal from my garden..

I think the flowers look fake, almost  like plastic as shown in this picture from a previous year when it climbed. 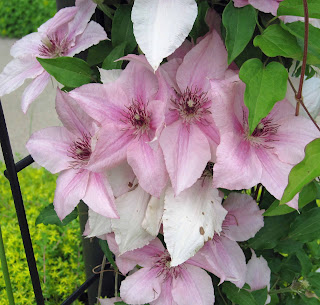 What was I thinking when I bought this?  I don't even like the flowers.

That's two strikes now.  Strike one - it doesn't climb like it should. Strike two - its flowers look like plastic. I just need a third strike, and it is out.

Strike three - it disobeyed me!

It's out!
humor vines