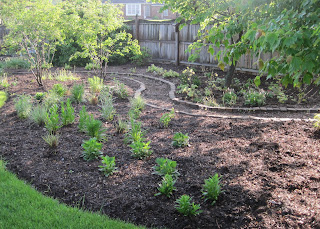 Lean in real close if you want in on a wildflower secret.

Now look behind you to make sure no one is reading over your shoulder.

After all, I wouldn’t want just anyone to find out this wildflower secret.

Then it wouldn’t be a secret.

Are you alone? Are you sure it’s just you reading this? Because if this secret gets out… well, we won’t let it get out. We’ll just keep it amongst ourselves, won’t we?

Now pinkie swear you’ll keep this wildflower secret. I’m trusting you with it.

Okay, I think its safe now to tell you that I have…

After all we are garden fairies. We know how to keep secrets. Well, we keep secrets except for ones about Carol in her garden.

Do you know what she did? We were aghast when we saw what she did and we have been wanting to tell everyone for days.

Wait, we are garden fairies. We can not just tell you this secret. That would break the Garden Fairy Code of Ethics Related To Keeping Secrets! So you have to guess.

But we are garden fairies, we will give you three clues.

Got it… August Dreams Garden.

Got that? Solidago is a goldenrod flower.

And the third clue is "Carol planted Solidago ‘Little Lemon’ on the edge of the high summer garden that her garden designer planned out and planted".

Rumor has it Carol is going to dig them up, though, and move them slightly because she thinks they need to be moved slightly. Another rumor is that she rationalized buying and planting them because after all, it was her garden designer who said she should go all the way to Perennials Plus to look at the plants and she surely knew Carol would not leave empty handed. Plus Carol realizes that if ‘Little Lemon’ turns out to be a lemon of a plant, she can easily dig it up and move it over to Ploppers’ Field.

We are garden fairies, we hope these three clues were enough for you to figure out what our secret about Carol was.

For those who are still scratching their heads and wondering what the big secret is, here is a picture. 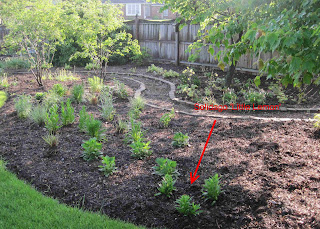 Three clues and a picture... that ought to make it pretty easy to figure out.

Submitted by Thorn Goblinfly
Chief Scribe for the Garden Fairies

P.S. We garden fairies believe this post qualifies for Wildflower Wednesday sponsored by Gail at Clay and Limestone because goldenrod, Solidago, is a native wildflower in the United States, even though ‘Little Lemon’ appears to have had some of (a lot of) its wildness bred out of it. We are garden fairies, don't argue with us about this or we will do stuff in your garden.  We are garden fairies...
fairies humor wildflower wednesday