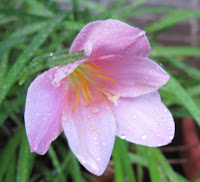 Garden fairies here! We have some stuff to write about, and we are garden fairies so we are going to do just that.

You will never believe what Carol did on the longest day of the year. By the way, we are garden fairies and the longest day of the year, the summer solstice, is one of our favorite days of the year. We have a big party to celebrate, starting just as soon as it starts to get dark, in the gloaming, as we call it. “Gloaming” – look it up and you’ll see that it is a magical time right before the sun really sets and night begins.

Anyway, we were going to tell everyone something. What was it? We are garden fairies… no, we already wrote that.

Oh wait, now we remember! We are garden fairies and we were getting ourselves ready to start our celebrations for the summer solstice when all of a sudden, we hear Carol mowing the lawn – in the gloaming! We are garden fairies and we did not like this. Why was she mowing so late? Oh, right, something about she kept thinking it was going to rain and it didn’t rain, so finally at about 9 pm she started to mow the lawn and she finished IN THE DARK at 10 pm.

Well, we are garden fairies, and we were concerned that Carol would accidently run into a garden fairy or a tree or something out there mowing in the dark, so we organized a bunch of fireflies, or lightning bugs as some people call them, to fly in front of her to light the way.

We think she liked that so we were glad to have done it for her.

The lightning bugs, or fireflies, are important friends of the garden fairies. We like to invite them to our parties so they can provide the lights. We are garden fairies; we supply the fun and merriment. It works well, all have a good time.

Everyone likes the lightning bug beetles by the way. They would not hurt a flea, of the Order Siphonaptera, but everyone hates Japanese beetles which really are beetles. Carol saw a Japanese beetle yesterday and she, well, we don’t want to say what she did or what she said, because we are garden fairies and it wasn’t nice, and we don’t repeat things like that. We’ll let Carol write about that later.