The May Dreams Gardens Board of Directors Met and... 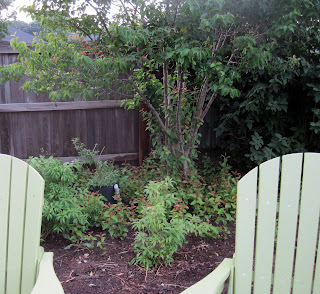 The Board of Directors for May Dreams Gardens recently met to review a full agenda of decisions, actions, ideas, and reports.

Members of the Board who were present included Hortense Hoelove, Dr. Hortfreud, Thorn Goblinfly, The Old Woman at the Door and Carol.

One of the first items on the agenda was how many votes Thorn thought she should have. She claimed to be representing so many garden fairies that she wanted extra votes to ensure their interests would be well represented. It was agreed by a vote of 4 to 1 that Thorn should have just one vote like everyone else.

The board also agreed by general affirmation that Carol should remain as Chairwoman of the Board. They tabled the motion that a representative of the rabbits should be permitted to join the Board, but agreed that the garden designer and hort enabler had helped to make tremendous improvements in the garden and should be retained in the future as needed.

In other business of the boring kind, the Board discussed how often each member should post on the blog and if in general, they should all post less frequently. There was quite a bit of discussion before it was decided that no matter what the Board decided, Carol should make sure to finish the third play, Life of a Perennial: A One Act Play, and post it as soon as it was completed.

She should then turn her attention to outside projects which might mean less posting in general, but for a greater good.

Finally, after a review of the top secret financial reports and general blog statistics, the Board got around to more exciting topics like what should be done in The Shrubbery where a shrub, to wit Viburnum prunifolium,  had completely run amok sending suckers out several feet in all directions. 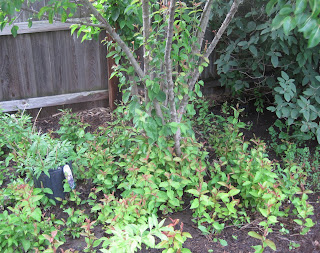 Many options were discussed ranging from a reprimand to complete removal from the garden. Some argued that complete removal seemed a bit harsh, while others said the Board members were fools to think that reprimanding a plant would have any effect whatsoever. Carol reminded the Board that she had given the Viburnum a chance by pruning it up last summer to make it look better.

It was also pointed out that the shrub that the Chairwoman wanted to plant in place of the Viburnum, Cottinus coggygria ‘Ancot’ (Golden Spirit), might also sucker, but Carol’s response was, “At least it would be a plant I love.” This caused quite a bit of discussion as heretofore, Carol had declared to the garden designer that she would never have a Cottinus coggygria at May Dreams Gardens.

At that point, Thorn reminded the group of the first secret to achieving happiness in your garden, namely, grow the plants you love. Did Carol really love the Cotinus as much as she said she did?

A motion was made by Dr. Hortfreud that Carol should remove all the suckers from the Viburnum and generally clean it up a bit to see if that put it back in her good graces. Motion was seconded by Hortense Hoelove and passed by a vote of 3 -1 with Thorn abstaining.  The Board also gave their permission by general acclimation that Carol could her remove the Viburnum from the garden if pruning did not help.

Following this discussion, the Board tabled all other matters and adjourned to begin preparations for the first day of summer.
board humor shrubs