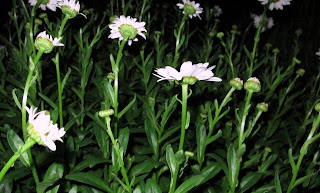 Would anyone like to guess why I was out after dark taking pictures with a flash in my garden?

Was I just randomly taking pictures hoping that when I uploaded them and looked at them more closely, I would find evidence of garden fairies?

Had I suddenly become fascinated with the look of pictures taken in the dark with a flash?

Was I trying to take pictures of fireflies lit up at night?

The answers are maybe no, no, and maybe, though I will not admit to the third one or the first one.

As soon as I was outside in the garden in the dark with my camera watching as little fireflies occasionally flew by and lit up for just a second, I realized that I would need far more patience, far more time, and far more skill to even hope to capture a picture of a firefly lit up in the garden.

I did happen to take a picture of this one which landed on my truck while I was standing there at dusk.


Fireflies provide as much light as anything else in my garden when they appear in early summer. I do not have any landscape lighting, other than a porch light and some flood lights on the corner of the house that I only turn on when I am mowing at dusk. Most people would not call those lights "landscape lighting". They don't up-light any trees, illuminate the path through Woodland Follies, or cast interesting shadows on the house.

I did notice while out mowing after dark the other night that going from the dark of the far side of the lawn into the light of the floodlights near the house can be a bit disorienting when you do it every few minutes. It takes a minute to adjust to seeing in the bright light when you enter it from a dark corner, and then it takes just as long to orient to the dark when you move away from the light.

This all reminded me of a comment about light pollution that Rosalind Creasy made when she spoke in Indianapolis last fall. She said landscape lighting is causing issues for insects, birds, bats, and other wildlife. I didn't know much about light pollution then, and I don't profess to know much about it now.  Doing a very quick search online, I found an article from National Geographic on light pollution with some basic information. I suspect there is probably a lot more information to be found that would shed light on this subject (pun intended, perhaps).

For the time being, I've decided that after all these years with no landscape lighting, I'm in no hurry to add lighting to my newly designed garden. I'm content to let the dark be dark, at least as dark as it can be, here on the edge of the city.

After all, there are birds, bunnies, bugs, bats, and perhaps a garden fairy or two out in the garden who probably appreciate the dark more than the light, so I want to make sure they have some dark here in my garden, to encourage them to stay.

(Did I just write that I wanted to encourage bunnies to stay here?)
science of gardening