The Old Woman at the Door Returns 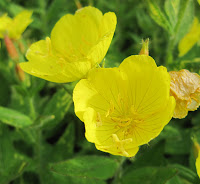 I went out to the garden early one morning and was startled to find the old woman, whom I generally refer to as the "old woman at the door", sitting on the boulder in the vegetable garden.

She had on her usual attire. This time it was olive green cargo pants, a minty green t-shirt that didn't quite match, and her gardening hat, which bore a striking resemblance to mine, though hers was older and more beat up.

I just assumed that when or if she returned, she'd always go to the front door and knock, but I suppose as we became more comfortable with one another she felt it was okay to just show up and go straight out to the garden.

After all, though there is a gate into the garden, it is never locked.

"I hope I didn't startle you", she said.

"I thought you might have come out here earlier," she said in a tone that was almost admonishing. "You know you are missing the best part of the day in the garden when you don't come out early in the morning, early enough to notice the sun rising."

"That's okay," she said, "I didn't really come here to scold you about not getting out to the garden earlier in the day, I came to..."

In mid sentence, her gaze shifted from me to something behind me. As I turned to see what she was looking at, she got up and commanded, "Come and walk with me over here."

She said it in a tone that left me no choice but to do as she asked.

To be continued...
old woman