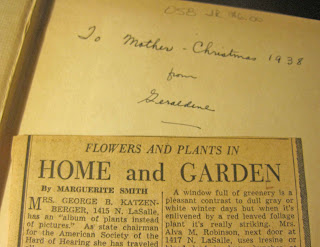 I need your help!

I found a yellowed newspaper clipping stuck in the pages of an old gardening book I bought last week, and it has sent me straight down a rabbit hole where the gardening advice is always curious and the people are interesting.

I am blaming Hortense for giving me a little push, or perhaps it was a giant shove down this particular rabbit hole, the likes of which I do not really have time for. She was the one who wrote and suggested that I look in old gardening books for some information that I can't seem to find anywhere else.

No, Dr. Hortfreud, I don't know who Geraldine or her mother are, though someone has signed the book "Mrs. H. A. Sherrill". I am not really interested in them. Instead, I want to know more about the author of the garden column, Marguerite Smith. Where was she from and when did she write it?

There was an engagement announcement on the back of the clipping about a couple with Indianapolis addresses, so likely the garden column was from an Indianapolis paper and so was Marquerite.

Then I checked in with my favorite genealogist-gardener, Annie in Austin, with the name of the couple listed in the engagement announcement and the month and day they planned to marry and she quickly wrote back that they got married in 1945. That probably means my newspaper clipping is 66 years old.

I also checked in with my favorite newspaper-junkie, former reporter now garden columnist for the Indianapolis Star, the Hoosier Gardener, to find out if she recognized the name Marguerite Smith and she did. In fact, she also has an old newspaper clipping of one of Marguerite's columns that she found tucked in an old book that belonged to her mother. She believes that Marguerite once wrote a garden column for the Indianapolis Star. Or was it the now defunct Indianapolis Times which ceased publication in 1965?

After more checking online, I discovered that Marguerite wrote an article for the American Rose Society on Rose Society Publicity. Frass! They only offer snippets of the publication so I only know how she started the article.

"The newspapers are, of necessity, full of bad news in these troubled..."

We could use that opening line today, couldn't we?

Anyway, as much as I was frustrated that I could not read the article in its entirety, it did give me proof that Marguerite was once the garden editor for the Indianapolis Times. Further proof came in the form of another article that someone posted as a PDF online

And there my search ended, at least for now. It is summertime and there is too much to do above ground in the garden and too many places to go to spend much time running around in rabbit holes looking for obscure references to long forgotten garden writers, as fun as that sounds.

Dr. Hortfreud, though I found some interesting information in these old books and this newspaper column, it doesn't really get me any closer to finding out about the Green Bandana Garden Club.

Or does it? Writing this letter has helped me pull myself out of the rabbit hole, dust myself off, clarify my thinking, and figure out my next move.

Thank you as always for listening (reading), Dr. H.