July 12, 2011
Over the past two days, I’ve observed something several times which has led me to develop a hypothesis.

Then I went looking on the Internet for how to test my hypothesis and ran into all kinds of explanations and formulas and statistics, which lead me to come up with another hypothesis that “statistics can make your head hurt”. I have no interest in testing out my hypothesis on statistics because of the probable pain involved.

My other hypothesis has no pain involved. It’s all about happiness and what makes people happy. I’m not even sure it is a hypothesis, though, because I don’t think it can be proven to be emphatically true or emphatically false.

Instead of proving my hypothesis, I may just make up a statistic about it, such as “Four out of five people…” and let someone come forward and prove me wrong. After all, aren’t 80% of all statistics made up, including that one?

Regardless of whether it is a hypothesis or a series of observations that can be quantified as a statistic, I’m sure that even if there was evidence to the contrary, I’d still believe what I observed not once, not twice, but three times in a twenty four hour period. In fact, now that I think of it, I’ve never seen any evidence to the contrary in regards to my hypothesis which is enough to make it true in my book.

My first observation occurred at an antique mall. I came across a booth and saw the tell-tale handles of garden tools sticking up in a corner. I walked over and looked down to see the business ends of the tools and what do you think I found? That's right. I found a hoe. It was an old, rusty hoe with a well aged handle. I pulled it out and carried it with me through the mall and observed that each person I passed looked at me, looked at the hoe, and just smiled.

My second observation came from an email exchange. I got an email from someone who had been searching on the Internet for a specific type of scuffle hoe. He came across my hoe collection page where he apparently found the exact hoe that he wanted and so he sent me an email asking where he could buy it. I fired back a quick reply along the lines of, “I’m sure you can find one via Google”. He wrote back that he’d searched for an hour unsuccessfully, so I went and looked at my hoe collection, saw which scuffle hoe he wanted and sent him the exact link for where to buy it. He wrote back and said I had made him very, very happy, so happy he could cry and he was going to buy one for his mother, too.

My third observation happened when the UPS driver stopped at my house earlier today. I met her at the truck as she pulled out a long box and said, “It only weighs three pounds”. I replied, “It’s a hoe”. She just smiled and handed it to me. It was a big smile.

I think those three observations are enough for me to put forth my hypothesis with a high degree of confidence that it is true. I believe that at least three out of four people, or more, will find it to be true.

But before I finalize any statistics related to my hypothesis, I should gather some more evidence through observation, through the reactions of those who might come across this post and read this far.

To assist me in proving my hypothesis and validating my statistics, please view the following picture and then leave a comment describing your first reaction. Choose from these three possible reactions.

3) I had no reaction. (I’ll bet you don’t even own a hoe and aren’t even qualified to answer. Or you are not well and should go see a doctor for a thorough once over.)

Here is the picture: 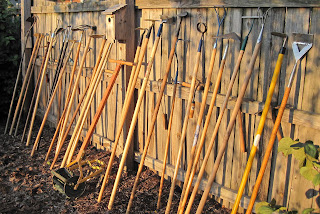 3) I had no reaction. (I’ll bet you don’t even own a hoe and aren’t even qualified to answer. Or you are not well and should go see a doctor for a thorough once over.)


Thank you for helping me validating my hypothesis, to be known in scientific journals as Dr. Hortfreud's Hoepothesis.