A Complete Guide to Fairy Holes

August 10, 2011
I've become aware that there is a lack of reliable information on fairy holes available on the Internet, while at the same time I've noticed an increase in these gateways to another world in my garden and others I've visited recently. These are odd times we live in!

I will attempt to remedy this situation, this lack of knowledge, by providing, as best I can, a complete guide to fairy holes.

Let us begin with a definition.

A fairy hole is the entrance, the gateway, into the underground abodes of various garden fairies who prefer to live close to the land instead of up in the trees, which is where tree fairies live.

Fairy holes can vary in size from just big enough to shove a marble down the hole to large enough to cause a gardener to trip over it if she or he catches it just right while walking over it. For this reason, and to avoid stepping on desirable plants, not to mention garden fairies, gardeners are advised to watch their step while walking anywhere in a garden.

Fairy holes often appear near the base of plants, under large shrubs and occasionally out in the open. The most common are vertical holes. These vertical holes may appear to be rather deep such that it would appear that the garden fairies might fall a rather long distance once they enter the hole, but this is an illusion. Upon close inspection, even those holes which appear to be long vertical shafts have horizontal tunnels near the openings that lead to most of the locations where garden fairies live. The deeper areas are generally used for storage or shared with snakes, mice, cicada killing wasps, and others.

Where garden fairies feel safe, secure and comfortable, they may build fairy holes that are completely horizontal with no drop at the entrance. These holes are often found at the base of stone walls, patio steps, or any other kind of curbing or rock edging in the garden.

In my own garden, I've noticed several new horizontal openings on a "step up" in my new patio. 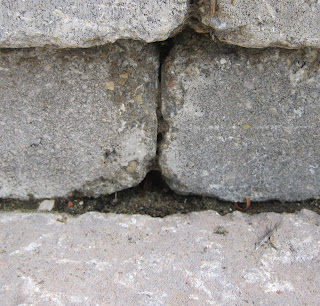 This is a rare, two level, fairy hole. I could not be more pleased.

Often fairy holes will appear at the base of trees, as you can see in the picture above taken at the Bloedel Reserve on Bainbridge Island in the state of Washington. As many of us who attend the garden bloggers' fling last month can attest, the reserve is an area with clear evidence of a high degree of garden and tree fairy activity.

Once you discover a fairy hole in your garden, leave it alone!

Though it may be tempting to poke in it with a sharp stick, resist doing so. Garden fairies consider this an act of aggression and may respond in kind, causing havoc in the garden and leaving warning signs throughout which may be mistaken as rabbit damage.

In extreme situations where a gardener just refuses to leave the fairy holes alone, garden fairies have been known to pack up and leave the garden en masse. When this happens, the gardener, no matter how hard they try and no matter what they plant, will never be satisfied with their garden, and worse, they will never know that the cause is the absence of garden fairies.

To help others recognize various types of fairy holes, I've collected pictures of them from several other garden bloggers. 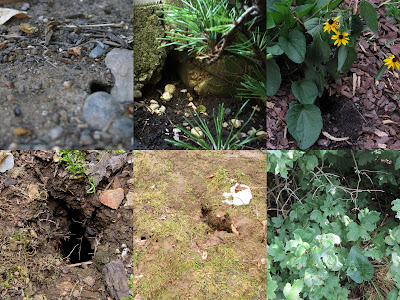 From the upper left, going clockwise, we have fairy holes from:

Leslie at Growing a Garden In Davis - She noted that she began to see more fairy holes appear in her garden when she began to build a fairy castle.  While some might think this is a coincidence, fairyologists would have expected this to happen.

Mr. McGregor's Daughter - This is an excellent example of a horizontal fairy hole, one that looks like it has been in the garden for quite some time.

Helen at Gardening with Confidence - In this example, we can see why it is important to be careful when spreading mulch around flowers. Garden fairies do not like to wake up to find the entrance to their fairy hole covered with mulch.

May Dreams Gardens - From my own garden, I find that many fairy holes appear under the cover provided by large shrubs.

Kathy at Cold Climate Garden - This is a good example of a fairy hole in a grassy area. No doubt it was once hidden by snow cover, but became visible once the snow melted.

Frances at Fairegarden - Here we have another example of a fairy hole out in the open. When fairy holes appear in the open like that, it is a sign that the garden fairies are quite comfortable in their surroundings and feel safe and secure.

I hope this guide to fairy holes has been helpful. If you have fairy holes in your garden, please feel free to post pictures of them and link back to this post. Please leave a comment if you do so. This will only add to our overall knowledge and understanding of not just fairy holes, but the garden fairies themselves.

(This post was written and posted with no input from the garden fairies at May Dreams Gardens. They politely declined to offer any statements or confirm or deny the information contained in this post.)
fairies humor