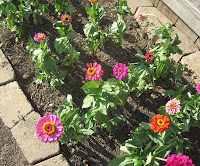 We don’t even know where to begin we have so much to say about what is going on around here. We are garden fairies so we are right in the midst of all of it.

First of all, we are garden fairies and we do not like this weather. It is too hot! We aren’t getting enough rain!  It is too hot!  We might break a 1936 record for most consecutive 90F and above days in !

Ol’ Miss Zinnia Drygrass, one of our older garden fairies, said she was born that year and she remembers how dry it was back then.

Well, we are garden fairies, and we certainly do indeed remember everything from the day we were born! Don’t question that.

We are checking the zinnias everyday now, watching all the pretty blooms and hoping that Carol will notice how dry they are and water them.  We are garden fairies, we need our zinnias, even if Carol did plant them in nice little short rows. She says that in a vegetable garden it most certainly is just fine to plant in straight rows.   We are garden fairies, we don’t care about stuff like that! Just plant, we say!

Speaking of stuff we care about, we garden fairies were in a snit, an absolute snit, when we saw all the pictures from Carol’s trip to Seattle with other garden bloggers. We were practically livid when we found out she had left us behind. We wanted to go!  It is so green and lush there.  Instead, we stayed here and made the best of it because we are garden fairies after all and that is what we do.

Oh, and there is more to tell about the goins’ on here at .  Some guy came by and put in a gate for the vegetable garden. A gate! But no fence.

You should also trust us that Carol is really writing up that page to explain all the guest post writers and visitors to her garden.  Our own Thorn Goblinfly will be featured as our primary garden fairy representative.

Thorn got involved in a big discussion amongst everyone the other night about what order they should be listed on the page.  We are garden fairies, we wanted to be first. It is only right that we be first.

Gloriosa Vanderhort, Carol's new fancy-schmancy-who-is-she-putting-on-airs stylist said that Carol should list us in reverse order of arrival, but that’s only because she came along so recently.

Well, we are garden fairies, and we stood up for our right to be first on the page!

Carol finally decided on alphabetical order by last name because she was too lazy to figure out what order we all got here. That was just fine with us, we are garden fairies and that means we are first since Goblinfly comes before Hoelove, Hortfreud, and Vanderhort.

Anyway, we are garden fairies and we are tired of this post, so we will just post it and let Carol have her laptop back.  Hopefully, she’ll work on the page but if she doesn’t, maybe she’ll finally explain about the Green Bandana Garden Club.  All those letters back and forth in that epistolary fashion, whatever that is,confuse us because we are garden fairies. We just want to know about it once and for all!

We are garden fairies!
Signed,
Thorn Goblinfly,
Chief Scribe for the Garden Fairies at