Society for the Prevention of Cruelty to Variegated Corn 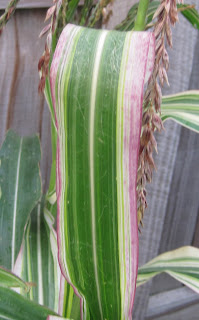 I don't know who you are, where you been or what your taste is in leaves, I just know you can't deny how striking that leaf is.

Just look at it. Good lines, fine gradient change from a good, basic green to light green to cream to a rosy edge.

For all of its fanciness, this corn is a survivor. I'm embarrassed to tell anyone how I mis-treated it from the time I sowed the seeds until I planted the seedlings in the garden and even after that.

I didn't abuse them with too much water, too much light, too much dark or anything harsh like that.

I sowed the seeds and forgot about them. NOT A SENIOR MOMENT!

Then about the time the seedlings had grown so much that they had pushed the clear plastic lid half off their little half-flat, I remembered I had sown the seeds in a some peat pots in the sunroom. Gasp!

They had my attention at that point. It's odd to look over and see how a plant moved that lid. I have my suspicions.

As soon as I saw how desperate those seedlings looked, I watered them and then rushed them outside for about 15 minutes of hardening off before I planted them out in the vegetable garden. (Really, you should give plants more time to harden off, but by this time it was Father's Day weekend, so there wasn't much time.)

When mid-summer arrived...  Ha ha, can't believe I did this.  I ran off to Seattle on the very day it got to 100 degrees Fahrenheit and I made no arrangements for any supplemental watering the entire time I was gone.

The leaves sort of curled in during that period of time. That's the corn's defensive posture to keep from transpiring too much water into the atmosphere when it is hot and dry.  Oops.

I watered them when I got home from Seattle. The leaves gradually uncurled, and now the corn looks nice again, though it is shorter than I had imagined it would be.

Just imagine if I had actually cared for this corn, what it might look like now?
vegetable garden