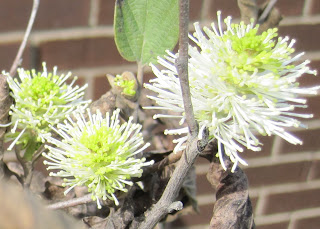 INDIANAPOLIS - A fothergilla was recently found to be blooming at May Dreams Gardens.  This plant, Fothergill gardenii, generally blooms in early spring, in the April timeframe, and has  previously not been known to bloom in the fall.

"I was walking along the east side of the house when these blooms caught my eye", said Carol M, the owner of May Dreams Gardens. "At first, I didn't know what they were because I never imagined such a thing as fothergilla blooming in October. Usually this time of the year its foliage is starting to turn all shades of red and orange."

"I did notice", said Carol, "that at one point this summer I thought the drought had killed this shrub. In fact, now that I think about it, at one time there were two fothergilla in this border, but now there is just one, so the other one must have died and I cut it back. Yes, now I remembering doing that.

Local garden authorities were not available for comment but are studying photos of the plant to determine if this fall bloom is drought related. 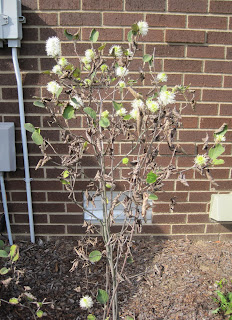 Carol, on the advice of her garden counsel, coincidentally named Fothergilla Lee Hortlaw, or F. Lee Hortlaw as he is known to most, later declined to further speculate on the cause of these fall blooms. She did say that she wished she had noticed these blooms a day earlier when it was Garden Bloggers' Bloom Day, as it would have created quite a sensation. She also expressed gratitude for all who posted for this monthly Internet meme.

A local resident, who refused to identify herself said, "Absolutely, if Carol had watered this plant at all this summer, it would not have flowered. But now that it has flowered, we garden fairies are going to take advantage of the situation and pick some of these for ourselves."

Other local gardeners seemed to be a little on edge with this recent bloom sighting. As one said, "We used to say 'when fothergilla blooms in the fall' to mean that something was never going to happen. Now we can't even say that any more."