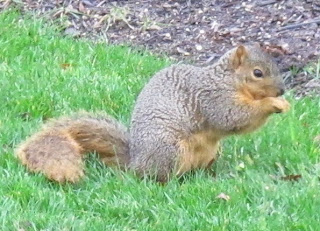 We have decided to write a very rarely seen garden fairy poem as a follow up to Carol's post from the other day in which she wrote a poem and also posted a poem that a squirrel supposedly wrote.

We say "supposedly wrote" in regards to the squirrel's poem because after reading it, we are highly suspicious that a squirrel actually wrote that.

We are garden fairies and we know a few things about squirrels and we have never known a squirrel to write anything, let alone a poem, which as garden fairies we know takes considerable more effort than just writing a few sentences.

But we would never come right out and say that a squirrel absolutely did not write that poem because we are garden fairies and look at us, we are writing a blog post.

We know that some people might be highly suspicious that we garden fairies are actually writing these posts but we don't care because we are garden fairies. People can believe or not believe whatever they want in our opinion as garden fairies.

And so people can believe or not believe that we actually wrote the poem that we are about to show everyone.

Before we wrote the poem, we garden fairies had a meeting and discussed what kind of poem we should write.

Ol' Sorghum Spittlebug thought we should write a limerick but that was vetoed overall because sometimes those limericks can get out of hand if you know what we mean and turn all dirty, and not dirty like dirt, but dirty as in, well, we are garden fairies, we don't really get into that kind of dirty.

Then Sweetpea Morningdew suggested that we write a sonnet. Whoa! We are garden fairies not Shakespeare, though there is some speculation that garden fairies did assist Mr. William with some of his sonnets but there is not really any proof, so everyone decided to skip that idea.

Oakleaf Spinnerweb suggested we should write an ode.  Everyone said no to the ode because that seemed like it would take too long and require a lot of thought. We are garden fairies and staying with one thought like that for awhile generally doesn't happen. No to the ode, no to the ode.

So without further ado, introduction or clarification, we present this haiku about squirrels:

Oh, we are garden fairies and we are so clever. We like haiku-type poems. We might write more of them.

Signed,
Thorn Goblinfly,
Chief Scribe for the Garden Fairies at May Dreams Gardens

(Note from the management at May Dreams Gardens:  We apologize for yet another frivolous blog post by the garden fairies and promise to return to serious garden blogging in the near future.)
fairies humor