I stowed summer away 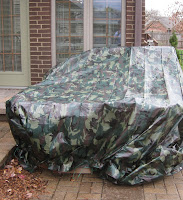 I stowed summer away for the winter under a big tarp that looks like camouflage.

The garage is full and I don't have a shed, so this is the best I could do.

It was windy as all get out when I tied that tarp down so I feel pretty confident that the tarp is tied down enough that it won't go flying off in the middle of winter.

There is nothing worse than seeing the tarp covering summer fly off in the wintertime, leaving it all exposed to the ice and snow. Summertime garden stuff does not like wintertime, at all.

I posted a few years ago that I always think of The Beverly Hillbillies when I tie that tarp down over all that stuff. I even wrote some lyrics to their theme song, which looking back on them, aren't all that bad.

Come listen to a story about a gardener like me,
A gardener who happens to be in good ol’ 5b,
Now one day I’m gardening and I see a bit of frost
And then the plants succumbed and I was lost.

Cold that is, wintertime, Indiana snow.

Well the first thing you know I’m running around
Pulling all the annuals up out of the ground
They said the indoors is the place I oughta be
So I loaded up the patio and moved some plants indoors.

Well, okay, I agree, those lyrics aren't all that good either.

Anyway, I've reached the point of fall clean up where if we had a big snow storm I wouldn't be panicking and running around like the sky is falling. I still have some stuff to do, but I feel like there will be time to do it before the snow really flies around here.

It's a good point to be at, just ask any gardener in good ol' 5b.
fall humor