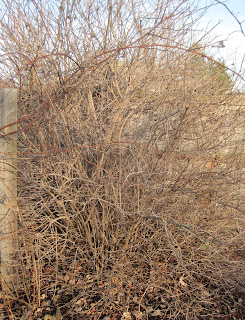 Some gardeners are afraid to plant large shrubs that grow wide and tall. I'm not.

This Snowball Viburnum is a mass of branches and has many suckers around its base. But I leave it in its natural form because it provides cover for the birds in all seasons.

In winter, the lack of leaves reveals just how many birds enjoy the cover of this shrub. When I'm not standing nearby trying to take a picture, they are all over it, prancing from one limb to another, darting from it to the nearby feeders and then flying back when I open the back door.

I'll be entertained for hours this winter watching them and trying to figure out what kinds of birds they are.

Elsewhere in the garden, the hostas have died back revealing mossy alcoves here and there. 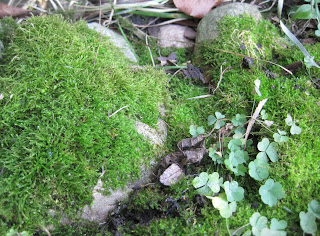 Any self-respecting gardener will recognize this as a garden fairy lair.

I am certain that throughout the winter, on sunny days  a garden fairy may be found sunning himself or herself on this mossy rock.  It is even harder, though, to be quiet enough to sneak up to this spot and actually see the garden fairies than it is to sneak up on the birds. They are too swift and alert to be caught out in the open by a big awkward gardener like me.

The best we can hope for is that they'll leave some sign that they were there.  Perhaps an extra little pebble or the tiniest tail feather of a bird will be left behind by the garden fairy.  Something will be slightly disturbed and if you are a good observer of details you might have a tiny chance of noticing it.

I revealed something else this past week, though not in the garden.  I found in my mother's papers an envelope containing a letter my older sister wrote to Santa Claus in 1964. 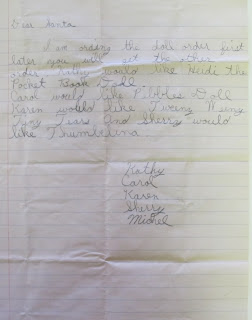 We apparently ordered our dolls from Santa.  We did not ask for dolls or claim to be good, we just ordered them.  And we made sure that Santa knew there would be another order later, presumably for items other than dolls.  Perhaps on that second order I asked for a trowel or something.

I don't recommend this order approach today. I feel it is best to ask.

Birds, garden fairy lairs, and a letter to Santa, all revealed in a few days... I wonder what else will be revealed in the days to come, the days of winter?
birds fairies family shrubs

Layanee said…
How nice of your sister to order for all of you. I do also love the reveal of the seasons as they change from one to another. I checked for nests just the other day. I am still looking.
Sat Nov 26, 09:36:00 AM 2011

growingagardenindavis said…
I'm so glad the birds and the fairies have safe places to stay this winter. And I hope you have some luck figuring out the birds you see...I find that great fun!
Sat Nov 26, 11:29:00 AM 2011

Lisa at Greenbow said…
The birds and fairies appreciate how you take care of them. You must have learned this from your older sister. It looks like she took good care of her sisters. I will be looking forward to more reveals.
Sat Nov 26, 02:20:00 PM 2011