November 23, 2011
Boltonia, a perennial flower native to the Eastern United States, grows in my garden in two places. 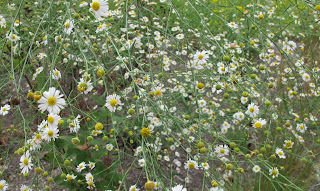 In an area that I call The Shrubbery, Boltonia asteroides bloomed in mid-November where I never planted it. 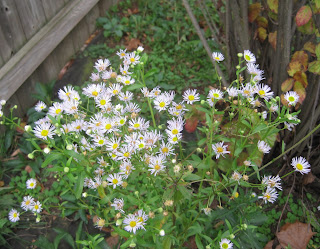 Based on that, I called it a weed in my November bloom day post.

Then someone emailed me and pointed out that Boltonia isn't a weed, it's a perennial flower.

But this Boltonia showed up out of nowhere in a place where I didn't plant it. Does that alone make it a weed?  It appears, too, to be in its native form and doesn't have that same airy quality that the named variety 'Snowbank' has. Does that just mean it is a wildflower?

Weed or wildflower?  Take your pick. I choose weedy wildflower.

(Please visit Gail at Clay and Limestone for more posts for Wildflower Wednesday, which takes place on the fourth Wednesday of the month.)
wildflower wednesday