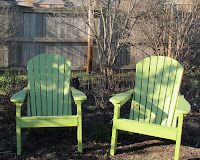 The old rabbit, Eleven, sat in the green chairs left out in the garden for the winter and watched the gate on the far side of the garden for signs of his replacement, a young, energetic bunny named Twelve.

As he sat and waited, he began to reflect on the past year. He had some things to be proud of. He had made sure that the new beds and borders that Ten had left him were well-planted. He also thought the gate to the vegetable garden was a nice addition, one that would always belong to him.

He remembered what Ten had said about the weather, not to take to heart all the bad things people would say about it. He was sure glad he had taken that advice because it was another hot, dry summer. He made a mental note to tell Twelve to try to do better, especially with rain. He wanted to be sure to tell him not to use up all the rain in the spring and then hold back on it all summer. Gardeners do not like that, he'd learned. He also learned that they don't like ice storms that bend trees over and snap twigs in half.

Outside of the garden, Eleven knew that Carol had been busy and much had happened to keep her away from the garden. He sure missed seeing her at times. But just when he thought she'd left for good, she always came back and did what she could, weeding, watering, watching the garden. He was sorry about the weeds. Oh, so many of them. He would be sure and tell Twelve to do something about the weeds.

Where was Twelve? Eleven was all packed, with a heavy load, and he knew Carol was ready to see him go. But he didn't take it personally. He knew she'd enjoyed quite a bit of the year. There was her trip to Seattle to meet other garden bloggers. She came back from that all fired up to do more gardening. Then there was the afternoon when a few of her garden blogging friends came to see her garden in person. Eleven wished he'd made the garden look a little nicer for them, but dog-gone-it, they did have some nice tomatoes to eat which hopefully distracted them from seeing all the weeds.

As Eleven gathered his final thoughts, he glanced up to see Twelve come bouncing through the gate.

"My you've got some energy about you", he said to Twelve. "I'm glad you're here. I'm ready for you, but before I go, I've got some instructions here somewhere." As he looked down at the instructions he'd written on a piece of paper, he glanced at his watch. "Oh dear. My time is up. I'll see you later, Twelve. Good luck and all that."

Just like that, in the blink of an eye, Eleven, was gone and Twelve was left standing alone in the garden.

"I wonder if any of those instructions were important", said Twelve to no one in particular. He glanced around and could see that though Eleven had done some work in the garden building on what Ten had done, there was still plenty that he could do. He felt quite up to doing it, too. He was eager, ready, and had a bag full of the past to guide him, plus some new resolutions.

"I can't wait to get started. This is going to be the best year yet in Carol's garden."

He then began to look for some paper and a pencil to write down all that he planned to do. "What gets written, gets done", he said. "I'll have to tell Carol that so she writes down her goals this year. Otherwise, we are likely to not get done what ought to get done."

And with that Twelve bounded up toward the house, eager and ready, new and energetic, full of excitement about the possibilities of a new year, a new Spring, a new growing season.