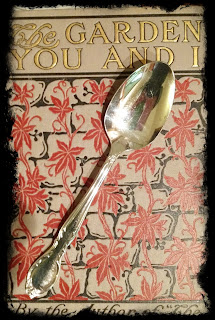 I opened up a box containing some silverware that my mom gave me several years ago and my thoughts turned to gardening, as they always do.

Via the Internet, I was able to figure out that this silver plate is the Moonlight pattern from the Wm. Rogers Co. I remember that my mom bought it one place setting at a time as part of a promotion at a local grocery store.

You all remember how that worked don't you? Every week you could buy another place setting at the grocery store. This was supposed to bring you back to the store each week, so you could buy the silverware.

My mom managed to purchase eight place settings each consisting of a spoon, a soup spoon, a tea spoon, a dinner fork, a salad fork, and a knife. Plus she purchased one serving fork and a soup ladle. The set also includes seven extra spoons. I assume that Mom  purchased eight extra spoons, which means one of those spoons is missing, and that’s where our thoughts turn to gardening.

My mom was never a gardener. Her one attempt at helping with any kind of gardening seemed to begin and end the day she offered to deadhead the petunias and ended up removing all the flower buds. At least that’s how the story goes.

But she never stopped me from going out and working in the garden.

I remember coming in and sometimes asking for a spoon and sometimes sneaking a spoon out to the garden to do some digging. Wouldn’t it be a good story if that missing spoon was one I had taken out to the garden to dig with, and I left it out there? Or maybe the story is that the little rabbits stole it from me and drug it down into a rabbit hole for me to discover decades later?

Or maybe I buried it in an attempt to conceal my thievery?

Or I planted it, thinking it would grow more spoons for a future rabbit proof fortress and then some raccoons came by and took it because they wanted to improve their table manners and then they found out their thumbs can’t grip like ours so they threw the spoon into the creek in the neighbor’s yard where the currents carried it from the creek to a river to another river until it finally ended up in the ocean. One day it washed up on the shores of England...

Those are much better stories than those where the spoon disappears in the trash or gets crushed in the garbage disposal.

Once upon a time, there was a little girl who gardened, and she occasionally took spoons from the kitchen out to the garden to dig. Sometimes her mother knew she did it and other times she didn't...
thoughts turn to gardening

Mr. McGregor's Daughter said…
See, if your mom had been a gardener, like mine, she would have handed you a trowel. (But that makes a much less interesting story.) I like the idea that you planted it, hoping for more spoons.
Sun Dec 11, 07:31:00 PM 2011

growingagardenindavis said…
I wonder what topic might, someday, not make your thoughts turn to gardening? I really can't imagine :)
Sun Dec 11, 07:50:00 PM 2011

Lisa at Greenbow said…
Oh that naughty little girl. I know another just like her. Wow, have you ever stirred up some memories. I also know two other children just like her.
Mon Dec 12, 06:07:00 AM 2011