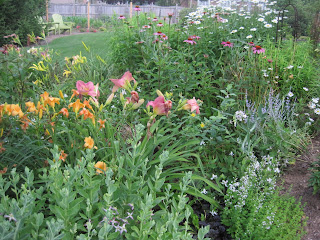 Something has been nagging at me for some time now, and I hope that you can help me. A year ago I decided to dig up another area of the back lawn to create a new flowerbed. Usually I don't consult with my husband before doing such things, but I thought it would be courteous of me to mention it to him since he is the head of lawn mowing here.

To my surprise, he wasn't very thrilled with the idea and told me, "You have enough flowers." "Enough flowers"?? I've never heard this phrase before and wondered if there was such a concept...

Dear Hortense, if you can find the time to answer this pressing question soon, I would appreciate it. If there is such a thing as "too many flowers," perhaps you could suggest a 12-step program for plant addicts like me. The new garden catalogs are coming in every day, and I'm already developing plant lust--Help!!

I am so pleased you asked this question as it has given me an excuse to take over the laptop and post something on this blog.

Do you know how hard it is to get a turn with this laptop? If Carol isn't using it, then the garden fairies are. Those garden fairies have become quite the prima daisy publicity hogs, thinking that every little thought they have ought to become a blog post.  I swear, they run through this blog like chickweed runs through the garden in early spring.

It's hard for a garden advice columnist to get a post in edgewise.

But your question is an important one, so move over garden fairies. Hortense gets the keyboard tonight!

I've consulted with some experts around here to help emphatically answer your question about the concept of "enough flowers".

First, I consulted with Carol's therapist, Dr. Hortfreud. She's a learned gardener-therapist-listener-sounding-board and has good input at times.

Carol's stylist, Gloriosa Vanderhort, was also asked if there is such a concept -- "enough flowers". She laughed. The only place she could imagine "enough flowers" was in one of those Japanese Ikebana floral arrangements that involve all kinds of rules about how many flowers are included. Gloriosa is not one for rules. She likes lots of flowers in the garden.

Now, if you want someone to follow rules, Miss Jane Hortaway, Carol's personal assistant and organizer,  knows all about rules.  I swear, you can tell Miss Hortaway about a rule and she will follow it off a cliff. So, we don't tell her many rules, as a rule.

Miss Hortaway would certainly know if there are any rules about how many flowers a gardener can have and she knows of no such rules. She also thinks the concept of "enough flowers" is pure fiction. As she put it, "Chief, you can never have enough flowers, as a rule".

Given all of this, there is no need for a twelve step program. There is no need to limit your plant catalog browsing. You can never have enough flowers.