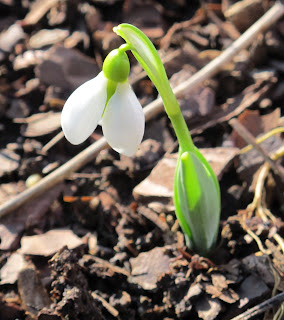 Has anyone every asked you what will happen to spring flowers that start to bloom in February because it has been a mild winter?

What if it turns cold again?  Will we not see daffodils bloom?  Will the snowdrop be happier in the snow?  What is the legend of the snowdrop?

Signed,
Curious at Half Past February

Don't even ask me that first question about flowers blooming in February. It will just send me over the edge with a tirade about how people should worry about a lot more than a few early blooms. People should actually celebrate early blooms and in general relax and enjoy whatever nature sends their way, be it snowdrops or snowfall.

Ditto the other questions about cold and daffodils. We will see cold again, we might see snow again and everything will be just fine, both gardeners and daffodils.

As for the Legend of the Snowdrop...

Once upon a time, there was a little garden fairy who wanted to bring cheer to the gardeners who were so weary of winter. She thought and thought about what she could do and decided she would make a little flower that would be the earliest blooming of all.

She at first was going to make her flowers all pink and purple but realized that those colors were taken by the crocuses. She thought about gold and yellow, but those were the colors of those selfish Narcissus. Finally, she decided to make her flowers white, the color of the snow itself, so they would blend in with the season.

The legend part is