Finally after the watching, wondering, and waiting, winter sent us some snow early yesterday morning, leaving flowers like snowdrops covered by about an inch of snow.

We'll be back to our mild winter weather before we know it.

This little quote seems appropriate for the season...

"Sing a song of Winter
The world stops dead;
Under snowy coverlid
Flowers lie abed."
From "All in a Garden Fair" by Alice T. A. Quackenbush (A. T. De Le Mare Company, Inc., 1925)

Here are some flowers that "lie abed" under "snowy coverlid" in my garden in mid-February.

There are golden crocuses. 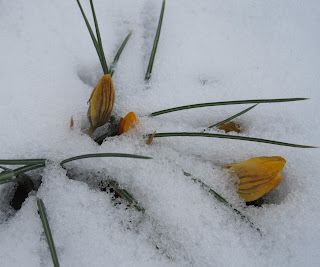 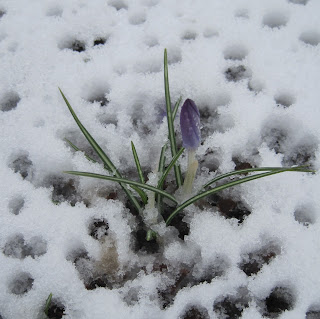 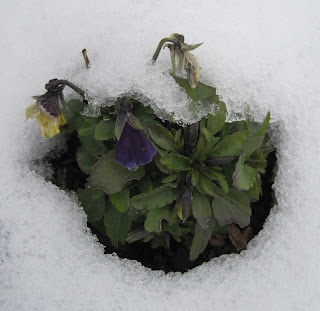 Other blooms braving the cold and snowy coverlid include the witchhazel, Hamamelis vernalis, and the Christmas Rose, Helleborus niger.

Inside, the Christmas cactus which bloomed in December has decided to repeat its blooms for February. 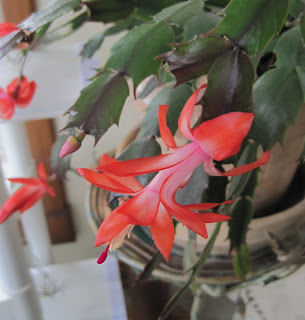 I'd like to think that it is my green thumb, my careful attention to all of this plant's needs, that has caused it to re-bloom. That is only true if neglect and occasional watering qualify as "careful attention". Sometimes, for some plants, that's all it takes.

And that's February in my garden.

What’s blooming in your garden on this mid-February day?

We would love to have you join in for Garden Bloggers’ Bloom Day and tell us. It’s easy to participate and all are invited.  Just post on your blog about what is blooming in your garden on the 15th of the month and leave a comment to tell us what you have waiting for us to see so we can pay you a virtual visit. Then put your name and the url to your post on the Mr. Linky widget below to make it easy to find you.

“We can have flowers nearly every month of the year.” ~ Elizabeth Lawrence