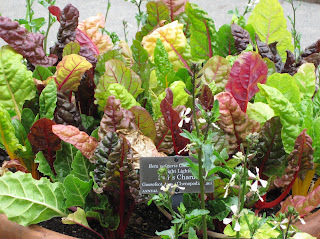 I was looking for pictures to include in a presentation I put together called "No Excuses--Grow Vegetables".

Or maybe it was "Grow Vegetables--No Excuses".

Either title, I presented it today at a spring gardening clinic.  The clinic took place at a school on the east side, just a few blocks from where my mom grew up.  I can just imagine my grandmother's diary entry for the day -- "There was a spring garden clinic today at the school up by the park. Daddy stayed home with the little ones so I could go. Such a treat to spend a day with gardeners. After a delicious lunch, there was a session on growing vegetables. I felt like I knew the speaker, but I don't how I could have. Came home thinking about planting Cue Ball squash."

Please don't tell my sister that during the presentation, I may have shown a picture of her garden as an example of what happens when you don't weed your garden as you should. I may have also mentioned it was my sister's garden.  May have.  I used the picture to illustrate that one of the secrets to happiness in your garden is to size the garden for the resources you have, including time to work in the garden, which my sister did not have much of that summer.  All good fun.

Anyway, as I went through all the pictures, wondering why I hadn't taken even more pictures of vegetable gardens, I ran across two pictures of plantings that I decided I'm going to copy in my own garden this spring.

The first picture I'm going to attempt to copy is the big container pictured above planted with Swiss chard and beets, with what looks like some radish that has gone to seed. I like that color combination. I can put the container on my patio or maybe on the front porch.  The weather should be good enough to plant it in a few weeks.

In a few weeks?  Whoa, don't panic.  I'll be ready, the garden will be ready.  Will the garden be ready?  Let's hope so.

In the meantime, I also found this picture, which I took at the Chicago Botanic Garden, along with the picture of the Swiss chard/beets/radishes container planting. 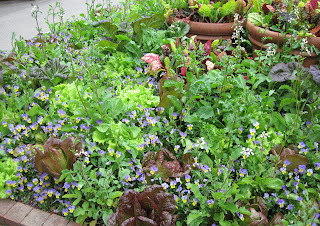 I really like this combination of lettuce mixed in with violas.  I think I'll also try to plant something like this in my garden.

After viewing all the pictures I've taken, I also decided that I am going to re-install the raised beds in my vegetable garden. Last year, I paid some guys to tear out raised beds because the wood I used to build them was more rotted than solid after nearly 10 years.  The crew who tore everything out left me with a clean slate, which I planted as long rows.

I much prefer raised beds, though, to the point that I'm almost borderline fanatical about them.  I will use either wood again, or if someone happens to know someone who might want to get rid of a lot of bricks, free for the taking, let me know.

(My apologies for the pun used in the title.  One can hardly resist...)

Veg Plotting reminded me that Salad Days are the fourth Friday of the month. She invited me to include this post as my February entry, and so it is.  Suddenly, I'm hungry for some really good lettuce.

If you happened to hear me speak on Saturday and would like to leave a public review, you can do so on on the Great Garden Speakers website.
salad days vegetable gardening