Pansies: Gift from the Garden Fairies 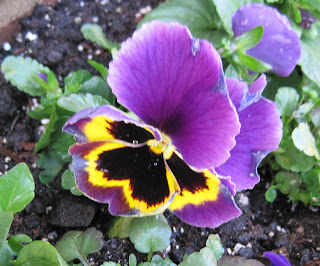 According to Alice T. A. Quackenbush, the pansies are a gift to us from the garden fairies.

I did wonder about that and suspected that there might be a connection between them. I would guess they are also somehow involved with little violas, too.

"Once the fairies were making ready for their annual midsummer night's revel and wanted to do something to make the world brighter for the human race. They put on thinking caps -- probably plucked from Foxglove-- and thought and thought and thought.  At last one of their number (and how we should bless her!) suggested that they make a new flower.  Unanimous approval and enthusiasm! So they took the blue from the sky, the red from the sunset, the yellow of the sunbeam, the brown of the earth; worked feverishly the night through; and lo! the Pansy with its glowing colors.  A few added the touch of comedy and painted caricatures of their friends on the petals, to be seen even today by those who care to look for them."  (Chapter VI, page 44, All in a Garden Fair)

I love the treasures of long-forgotten garden lore that can be found in old books.

Knowing what we now know about the origins of pansies, I invite you to look at the parade of pansies featured on Faire Garden with new appreciation. Look intently to see the faces of garden fairies.

Perhaps you might see the face of our own Thorn Goblinfly in one of them?