When a gardener goes downtown 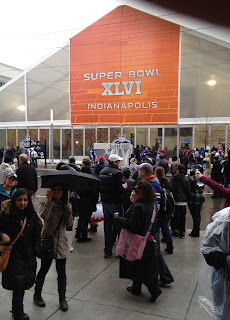 When  a gardener goes downtown and the downtown is Indianapolis, and it is the weekend of the Super Bowl, she expects to see a crowd.

She easily finds those crowds, everywhere she walks.

She notices that football fans are like gardeners.  They don't let a little bit of rain keep them from enjoying the outdoors.

She makes her way through the crowds to the center of the city because she wants to see the giant XLVI.

She sees it and though it is nice, she thinks it is far too large a sculpture for her garden. 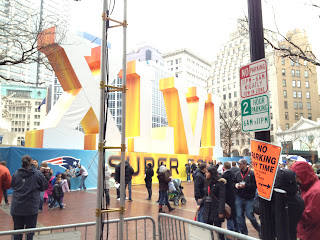 Along the way, she hears street preachers on every corner and encounters more people.

She turns down a side street and has hope when she sees the Artsgarden and a few less people. 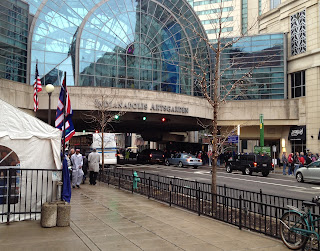 She knows the Artsgarden isn't really a garden. It's more of  a gathering place.  She is reminded that gardens are gathering places, too, not only for gardeners but for garden fairies, too.

Later, she finds herself in front of the hotel where GWA members stayed when they visited Indianapolis in August.  She notices that someone took the time to plant a few pansies there, which is not something generally done in February in Indianapolis. 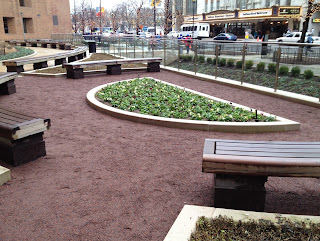 She wonders if maybe having all those garden writers visit Indianapolis left its own special imprint on the city, the way the Super Bowl is leaving its mark.

As she makes her way to her actual destination, she encounters a lovely sculpture, smaller than those giant letters. 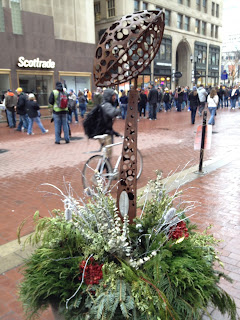 She remembers that the Hoosier Gardener wrote about these. She would love to have a Girly Steel sculpture in her own garden someday.

Finally, when a gardener goes downtown and the downtown is Indianapolis, and it is the weekend of the Super Bowl, she ends up at her final destination, intact, and remembers why she would venture downtown with all the crowds.

She would venture downtown to see a basketball game... 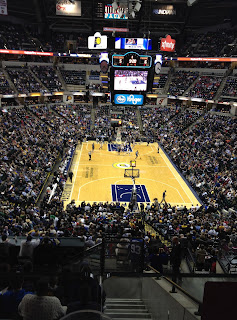 The official sport of gardeners.

humor when a gardener