Dang and Darn in the Garden 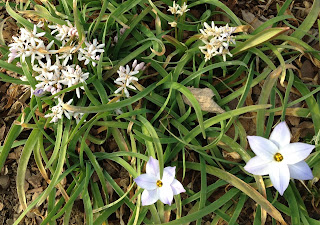 Have you seen Dang and Darn in your garden?

Whenever you start to garden, whether it is at the beginning of the season or for the first time in your life, they show up in the first five minutes and then they stay forever.

Dang is not hard to find, if you just take a minute to look in your GArDeN.  Darn is just as easy to spot in your gARDeN and is often with Dang.

In just a few minutes of my describing my garden, it's easy to see just how pervasive these two are here.  For example...

Dang, I wish I could remember the name of those little white flowers in the picture above. Glory of the Snow?  Is that the common name for Chionodoxa gigantea alba?  Dang, I'm not saying that outloud. I do remember that the other flower is Ipheion uniflorum,with a common name of Starflower.

Dang, I wish I had spent more time weeding the vegetable garden late last fall.  It's going to be a mess to clean up now with all those Darn weeds.  And there's a lot of Dang out there because I haven't rebuilt the Darn raised beds. It just goes to show that  Dang and Darn do like to hang out together.  Though, I keep reminding myself that I only have to build one raised bed by March 17th so I can sow seeds for peas.  I can build the rest of the raised beds after that.

Dang, I wish I could find a couple of flats of old-fashioned violas. I'd plant them along the path in the woodland garden. They would add some color  there for the big Easter egg hung.  I just didn't plant enough Darn bulbs along that path.

Dang, I need to call someone to remove that Darn suckering Viburnum out in The Shrubbery.  If I don't I'll be danging it all summer-long.  Dang, no one wants that to happen.

I could go on about how much impact Dang and Darn have on my garden, the mischief they cause, the antics they do. There are countless examples. I'm sure others have Dang and Darn in their gardens, too.  Some see them more, some see them less. But no one escapes these two. It doesn't matter how good or experienced a gardener you are, Dang and Darn are there in your garden.

The trick to gardening with Dang and Darn is just that, to garden with them, accept and embrace them,  If you do that, it lessens their power over you.

Oh, and if you laugh at Dang and Darn? Try that, you won't believe what will happen. Dang and Darn will actually become your friends.