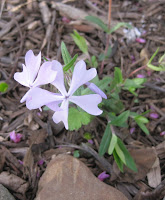 We garden fairies are so excited that we can barely breathe.  You would not believe all the excitement around here, all the garden activity taking place, and no, we are not talking strictly about the early blooms, though those early blooms are very exciting to us.

No, we are not talking about that threat of frost a few days ago. Nothing happened because there was no frost.

We are talking about other happenings. Really, we are about to explode with excitement because it is all so exciting. We are garden fairies, we get so excited and so anxious to tell about stuff that we often find that we are actually holding our breaths with excitement. We are so excited that right here, right now, we have to take a moment to calm down.

So please, give us just a minute. We promise we will tell about all of the excitement. We are garden fairies, we would never make this a teaser post where we go on and on and then claim we are out of time and leave good, kind people who read this blog hanging, waiting. Ha! Only Carol would do that.

That said, we need a moment to catch our breaths, organize our thoughts, which is not easy for us garden fairies. As a rule, we are not all that organized.  Right now, we will take a moment, so count to ten and then read the next paragraph.

Okay, we are garden fairies, we are ready.  We have a big announcement.

Carol brought in people to help re-do the vegetable garden.

Here's a before picture.  If you are squeamish, scroll down real fast now because this picture is not for the faint of heart gardeners. 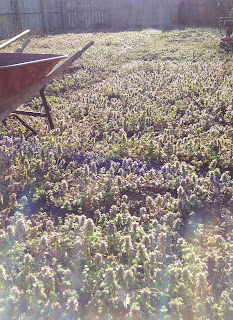 Now we want to show you the garden after the people came and cleared it off and leveled it up. 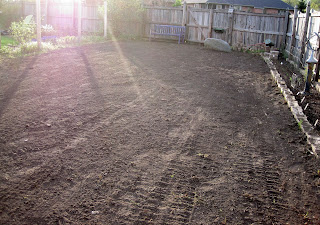 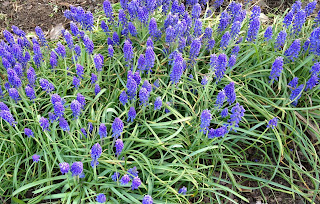 What makes them so pretty is that they are not surrounded by weeds.  That's the other big news we garden fairies are so excited about.  Carol's sister came over and helped her weed and wow, there's a garden and flowers and all kinds of pretties under those weeds.  Who knew? Well, we garden fairies knew, because we were hiding in that grape hyacinths while they were weeding all around it.  And we were never discovered. And you know what else we garden fairies knew and Carol just seemed to have discovered.  Weeding goes twice as fast when you have two people weeding instead of one. Really, it is weeding rule no. 3. Or maybe no. 4.

Anyway, where were we and has any one read this far down? Oh right. We also know that Carol is having those people come back and lay out edgers for brand new, raised beds in the vegetable garden. We are garden fairies, and we are excited to see this happen.