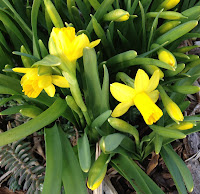 How else does one describe the thoughts of a gardener on the first warm day of spring?

How does one explain the furtive glances out the window, the longing to go out and do something, anything, in the garden?

How does one explain the head turning and walking through the garden, the gardener nearly running from one bloom to another?

How can irises be fading already? Where have the snow drops gone? And crocuses? Where did these new blooms come from? And miniature daffodils? Already? How can it all be happening so quickly?

Garden fairies here. Whoa, we are garden fairies and we saw quite a sight this afternoon. We were minding our own business, which is what we always do, rumors and whispers to the contrary not withstanding, when here comes Carol. And what does she have? Three flats of pansies, that's what she has. Pretty ones, too. All white and purple and lilac colored. None of those faceless pansies, either. We don't like those. They are soulless. We like our pansies to have faces. Though, like Carol, we don't like other things to have faces in the garden, other than flowers.

Anyway, the next thing we know, Carol has hauled out the wheelbarrow, some bags of potting mix and the containers that she only uses for pansies. We were so excited! Yet a bit afraid. We ran for cover but were close enough so we could see the dirt a-flying and the pansies a-flinging. Next thing we know, Carol has containers all planted up and the window box, too, all full of pansies. Yeah. We are garden fairies, we love this day every spring, though this spring it seems a little earlier than usual. Hey, we are garden fairies, we checked and she did plant earlier, by about a week.

Carol sure can move fast. We are garden fairies, we'll have to keep that in mind. For our own safety, mind you, because we wouldn't want to accidentally be seen or worse -- stepped on. Shudder at the thought.

All of us at May Dreams Gardens are pleased that this blog has been included as a reader's choice finalist for About.com's Best Garden Blog.  You can vote once every 24 hours until March 21st with any valid email address.  We (the garden fairies and I) appreciate your votes, if you are so inclined to vote.  Click on the link to do so. Thank you!