Once there was a garden there 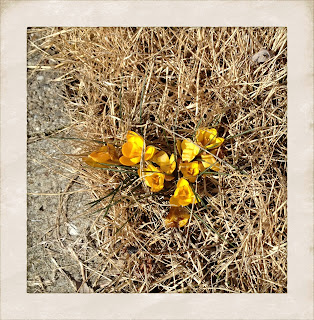 Once there was a garden there.

I caught a glimpse of it in the crocuses blooming in the winter-weary lawn.

The garden is gone, for the most part, but I could see the shadows of where it once was. I could tell that at one time those crocus blooms weren't in a lawn but were part of a flower border running alongside the walk-way to the front door, a flower border that someone planted and tended.

Once there was a garden there.  I remember seeing it years ago.

Last weekend I was near where my Mom grew up, where my grandmother lived for most of her adult life.

Once there was a garden there, too, and I wonder sometimes how much of that garden still exists today, forty years after my grandmother's death.

I remember the lily-of-the-valley and the old fashioned August lilies along the side of the house.  I can see in my mind the big old apple tree that was just a few steps from the back door.  I remember collecting the seed pods of the catalpa tree and picking the violets that grew in the lawn.

Once there was a garden there with a snow-ball bush and white-blooming spirea and perennials, including mums and phlox.

I thought of driving by to see how the house and garden look now - it was just a few blocks away. But I didn't.  Sometimes it's better to just remember that once there was a garden there, and imagine that it is still there today.
family gardening