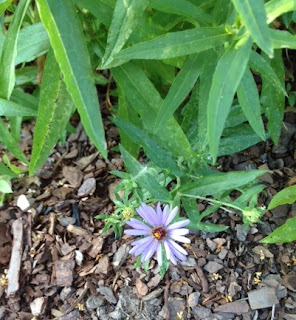 We interrupt the happiness of spring in the garden to note that one of the Aster oblongifolius 'October Skies' has offered up a flower.

This flower is several months early, no doubt because this plant knows it is dying and has decided that it must set seed now before it is in such poor condition that it can't set seed at all.

I suspect it has a botrytis blight of some kind. This same condition occurred on one of six of these asters last year, but I stuck my head in the compost bin and ignored it.

There is no ignoring it now with five of six clumps of this aster clearly infected. 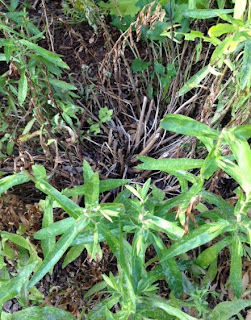 I'm not the kind of gardener who goes rushing for the chemicals when something like this occurs.

Instead, I cut off what looks like the diseased stems or remove the plant.

"Seeing as how" removing a few stems infected last year did nothing and now it is a bigger problem, I no longer think that will work. I'm moving on to the other option. This weekend, I'm digging these asters up and throwing them in the trash.

Søren said…
Oh, the poor plant... Still, some times one has to be ruthless, and this looks like one of those times.

Fairegarden said…
I am so sorry about the aster disease, Carol. October Sky is one of my favorite asters, so robust and the color of the blooms so perfect with everything that normally blooms at the same time. I hope you are able to replace it with a healthy specimen, perhaps in a different spot.
Fri May 25, 07:28:00 AM 2012

Dee/reddirtramblings said…
Sorry to hear about your aster disaster. I often stick my head in the compost bin too. Yes, bluish grasses sounds very nice. Perhaps, some that are perennial?~~Dee
Fri May 25, 08:18:00 AM 2012

Layanee said…
Did you have a particularly wet spring? I think editing is very difficult for most of us. You have supreme editing skills. Go for it.
Fri May 25, 08:42:00 AM 2012

Commonweeder said…
My aster just kind of dwindled away, so I am looking for a replacement. I remember that nothing is permanent.
Fri May 25, 12:33:00 PM 2012

Mr. McGregor's Daughter said…
If it isn't botrytis blight, it's aster yellows. Tough love is the only way to handle it. If you're looking for a grass recommendation, Schizachyrium scoparium 'Carousel' is a nice one, more upright than the species little bluestem.
Fri May 25, 09:08:00 PM 2012