Did I plant that? 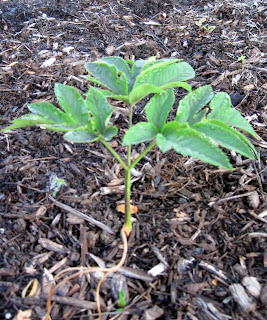 No matter how long you've gardened, or how good your record keeping is, there comes a time when you look at a plant and ask yourself, "Did I plant that?"

Did I plant this?

It looks like I might have.  There's a little piece of last years dried up growth still clinging to the base.  That could just mean it probably was there last year, but it still could be a weed I just didn't get around to pulling.

Walnut tree seedling? No, I've got those in other parts of the garden and they look different.  Though, heaven knows, or actually the squirrels know where there are walnut trees around here. I guess the woods behind the houses across the street include walnut trees.  The squirrels like to bring walnuts over to my garden and either bury them or throw them on the driveway to crack them open.

Do I let it grow a little more and see if it starts to look like some plant I want to keep?   There's just one of whatever it is, how much harm could it cause?

There's a lot to do in the garden this time of year, so I think I'll just let it grow a little more and see what happens.

Maybe some nice reader will come along and identify it for me?

In the meantime, I do know what this plant is. 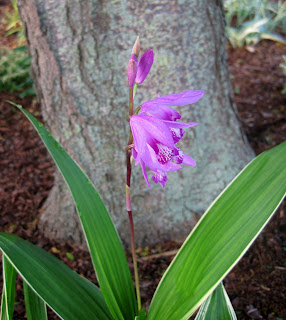 I definitely planted it, and several more like it. I'm working on getting it to naturalize around this locust tree.

Update a few hours later:  Thanks to Mr. McGregor's Daughter, I remembered that my mysterious plant is Angelica giga.  I bought it about three weeks ago. Wonder where the tag is? Wonder where my memory is?