I named another garden 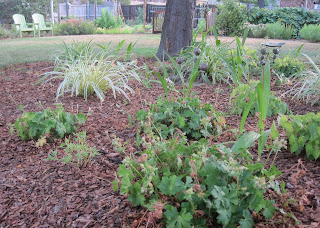 When the garden designer laid out the gardens a few springs ago, she described the bed around the locust tree as a "groundcover quilt".

What I recall from her description is that it should be a calm sea of greens and  because it was by the patio, it would be filled with low growing plants that would not obstruct the view of the rest of the garden.

As with the other gardens laid out by the garden designer, I have kept mostly true to her design.

In this bed, she specified Epimedium x rubrum, Geranium 'Biokovo', Hosta 'High Society', Liriope muscari 'Varietata' and Asarum candadense.  I've held true to that plant list, except, I left some hardy ground orchids, Bletilla striata, that were  already there and I keep adding more. They aren't big plants and they'll blend in.

Then for spring color in my sea of green I planted some pink grape hyacinths, 'Lady Jane' tulips, and Narcissus 'Emcys'.  I had also purchased white crocuses for this area, but accidentally forgot they were for this border and planted them out in the lawn. Oops.  Plus I noticed some toad lilies growing in there that I thought I had dug up. They won't get that big, so, they, too, will stay in this ground cover quilt.

And I planted some Dianthus along the edge that borders the patio.

Other than that, I am keeping this border mostly as designed.

One other little thing I did earlier this spring was move the bird feeders over to the edge of this area because they were obstructing my view of the new sculpture in August Dreams Garden.
The birds like these feeders on the edge of this border. The tree is overhead which makes it easier for them to fly to safety when I come bolting out the back door.  I like the feeders there, too.  I can see them from most of the back windows.

I'm getting a lot of birds at these feeders, including downy woodpeckers, cardinals, and red-winged blackbirds  So, in their honor, and in keeping with the idea that this is a garden of low-growing plants, I am officially re-naming this garden border, loosely called "groundcover quilt" by the designer,  Birds' Blanket.

If you are keeping score, here's a run down of the gardens within my garden:

I still have a couple of other garden borders to name.  Don't rush me though. Naming a garden can't be rushed.