June 04, 2012
This spring, I have finally, at my advanced aged and with all my gardening experience, decided on the best tomato stakes for my garden.

I am, of course, a fervent staker of tomatoes, having learned how to grow tomatoes from my father, who was also a tomato staker.  It was all I knew, and all I cared to know about growing tomatoes.  Stake them. Don't cage them.

When I decided that I had finally figured out the best tomato stakes for me, I recalled that when my Dad was about the age I am now, he, too, found the perfect stakes for his tomatoes. He used heavy duty 'T' fence posts. He sank those fence posts a good 18 inches into the ground and attached cross bars between them.  There was no tomato plant that was ever going to grow so large that it would pull those posts down.  It was a permanent structure.

In my own garden, I have opted to not put in a permanent structure for staking my tomatoes because I like to rotate my tomatoes around the garden, planting them in different locations each year, to foil those pesky plant diseases and other pests.  Though, no matter where I plant my tomatoes, the tomato hornworms find them.

Instead, I pound two foot lengths of 1" PVC pipe about a foot into the ground and then drop a stake into those pipes.  Over the years, I've tried several stakes, including those vinyl coated metal stakes.  Last year, I bought a new set of them and by August, several of the stakes had been pulled over by the weight of the tomato plants.

The only stakes that lasted and never bent were four metal spiral stakes I purchased about twenty years ago. Year in and year out, those spiral stakes have held up, no matter how big the tomato plants are.  Yet, I hesitated for several years about buying more of them because they aren't cheap.  But then I figured out the cost of all the stakes I've purchased and discarded and decided to put a crow bar in my wallet and buy ten more spiral stakes.

Today, I set them up in the yard and painted them lime green with accents of bright yellow because I had some spray paint in those colors left over from another project.

Before, they were all shiny and metal, except the old ones, which were more of a rusty brown. 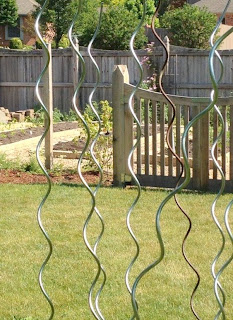 Afterward, they were bright and garden-y colored. 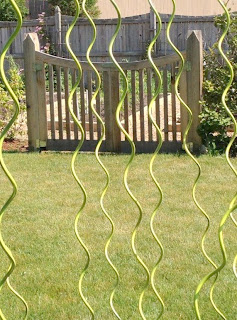 Out in the garden, I think they look almost sculptural. 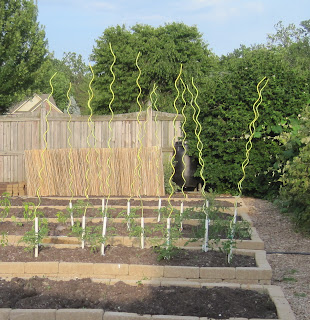 I think next year, I'll paint that PVC pipe a lovely green, too.