Wildflower Wednesday: I watch with interest 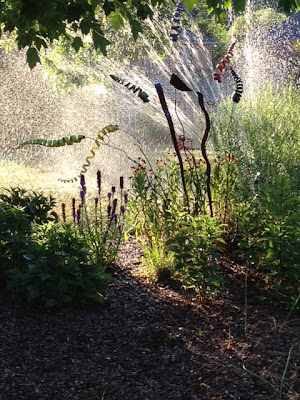 I am watching the flowers in my August Dreams Garden border with interest. This area is filled with mostly native plants, though some are named varieties of native plants.

What has captured my attention is early blooms. So far  the hybrid goldenrod, Solidago hybrida 'Little Lemon'  has bloomed early.   My other goldenrod, the rare Solidago shortii  'Solar Cascade' is loaded with flower buds.

Further down this garden border, the New England aster, Aster novae-angliae 'Alma Potschke' is in nearly full bloom, though it is not as covered with flowers as it is when it blooms in the fall.

Liatris spicata is also in full bloom, though this does not surprise me. It bloomed in July last year, as I recall.  But I am bit surprised that  the sneezeweed, Helenium 'Mardi Gras', would show up to party so soon.

I am watering this garden regularly now because this is the driest June on record and these plants are just starting their second season. I hope that in future years, when or if it is this dry again, this garden of mostly native wildflowers will do well without a lot of additional water and return to its planned flowering time of August and later.

Time will tell if my hope is well-founded or foolish  nonsense.

I think it is well-founded.  After all, these native wildflowers should be adapted to this climate.

What wildflowers are you watching these days?  I'll bet other gardeners are watching early blooms, too. I'm going to visit Clay and Limestone to check out if anyone posted about them for Wildflower Wednesday.
perennials wildflower wednesday

mimi said…
I too have noticed early blooming flowers, particularly, chicory, rudbeckia, Queen Anne's lace. It's been a frustrating year as we'll be part of a tour and the usual blooms for July will be done, I think.
Wed Jun 27, 07:31:00 AM 2012

Helen Malandrakis said…
My rudbeckia is not blooming, although it is full of buds. My helenium is ready to bloom. I know that they will bloom and be gone before they normally do, but there's nothing I can do about it.I continue to water, because of the drought.
Wed Jun 27, 07:38:00 AM 2012

Jennifer said…
I have many things that are blooming early as well. My rudbeckia is nearly ready, my hibiscus is in bloom and about a month early. I have pinched back most of my fall blooming plants. It is strange....some of the plants have been on fast-forward and some of them are doing exactly what they should be!
Wed Jun 27, 07:44:00 AM 2012

Rose said…
My rudbeckia is blooming ahead of schedule, and I have asters starting to bloom, even though I thought I had cut them all back a few weeks ago. Your August Dreams garden may have to be renamed this year:)
Wed Jun 27, 08:12:00 AM 2012

Gail said…
What a summer! My flowers are all ahead of schedule, but, that makes sense when we consider that summer started in April in my garden! I fear the watering hose is going to sprout in my hand....I've spent way too much time watering. gail
Wed Jun 27, 10:55:00 AM 2012

Cassi said…
Like everyone else, watering seems to be the only thing I do these days!

My butterfly milkweed and regular milkweed have bloomed. And even though I've watered them, they're still water-stressed, with the regular milkweed displaying limp blossom clusters that are almost white.
Wed Jun 27, 11:26:00 AM 2012

Hallerlake said…
Here in the NW, most of our natives are spring bloomers. They go dormant in our bone dry summers. The foxglove (naturalized rather than native) are blooming, as are the columbine.
Wed Jun 27, 02:51:00 PM 2012

Dee/reddirtramblings said…
My asters which are now non-asters according to the taxonomists, are trying to bloom. I keep cutting them back and telling them to wait, but it may all be in vain. Happy WW.~~Dee
Wed Jun 27, 03:10:00 PM 2012