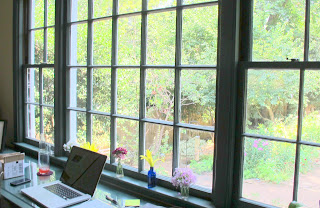 What fun it was to go inside the house of Elizabeth Lawrence after touring the gardens.

I wanted most to see her study, which features a large window that looks out over the garden.

When we entered the study, I could see that Andrea, the Wing Haven staff member who works in Lawrence's garden, sets up the vases to display samples of what's blooming in the garden, just as Lawrence was known to do.

That's fitting  because Lawrence's study is under a conservation easement, so it can't be remodeled and should be preserved as is.

Lawrence kept notes about the plants she grew in the garden on thousands of 3 x 5 index cards, which are all kept in file drawers in the study. 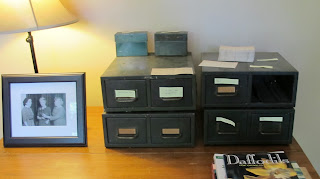 Andrea showed us a sample of one of the cards. 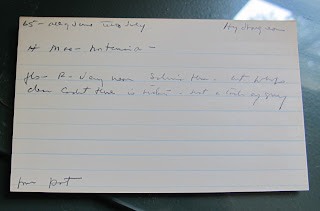 She says she is still looking for the secret decoder ring to help her decipher the information on the cards.  Because there are few photographs of the gardens when Lawrence was alive and gardening there, her books and newspaper columns along with these cards help Andrea and others determine what plants Lawrence actually grew in the garden, so they can re-introduce some of those that have disappeared over the years.

The goal, per the Wing Haven website, is not to turn the garden into a museum, but to treat it as a  dynamic plant laboratory which is how Lawrence viewed her garden.

Along another wall, there are book cases filled with gardening books. The books on the shelves today were donated by Allen Lacy.  I discovered that all 513 of Lawrence's books are now housed in the Cherokee Garden Library at the Atlanta History Center.   Oh, that's a rabbit hole I want to go down and check out some time soon.

I would have loved to have stayed longer, but I wanted to leave some time to see Wing Haven,, purely to show respect and appreciation to the Wing Haven Foundation, which had agreed to purchase and preserve Lawrence's house and garden. Plus we still had a day's drive ahead of us to get to the ocean.

I was very glad I didn't skip Wing Haven. More on it later...

(Update from Bobby Ward:  "Elizabeth Lawrence's columns for the Charlotte Observer were typed, as were her book manuscripts.  Her letters to friends were hand written.  The books at the Cherokee Library in Atlanta were sold by the niece and nephew from Lawrence's estate. The library has them well organized and it has taken all the clippings, notes, seed lists, and many other scraps of paper from the books and filed them separately, identifying which book they were removed from.")
books gardens travel