The Gardens of Elizabeth Lawrence

July 13, 2012
Have you ever been in a garden for the first time and felt like you had been there before?

After reading many of Elizabeth Lawrence's books and gardening columns and devouring all the information that the Wing Haven Foundation has posted online about her life and garden, it all seemed so familiar to me as I entered the gate to her garden on Saturday, June 30.

My photographs, taking during the late morning, close to noon actually, are admittedly not of the best quality, but please indulge me as I post some of them.

As I entered the garden, I passed by the bamboo she planted outside her dining room window. 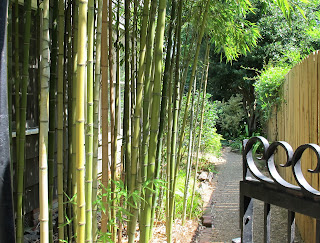 She learned, as many gardeners do, that running bamboo like this needs to be contained and controlled or it will spread and sprout everywhere.

I followed the paths that she had laid out in the 1940's when she and her mother built the house and gardens.  The center path goes from the house to the back off the garden. 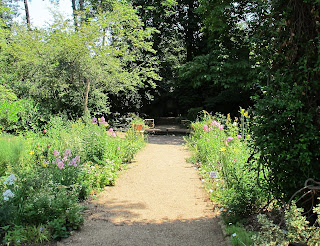 On its way, the path goes around a pond which still has the same frog fountain in it  that was there when Lawrence owned the garden. 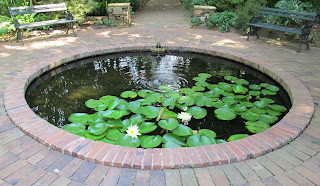 At the end of the path, I found the plaque of Madonna and Child, just where I knew it would be. 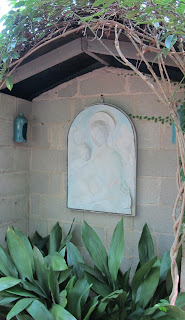 According to Andrea, who works in the garden, they have plans to have this plaque restored as it is showing its age. She also said that they have records that indicate Lawrence made this plaque herself.

From the back of the garden, you can look up to the house to see the windows to Lawrence's study. 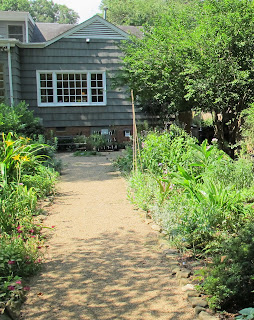 Lawrence designed the house and garden to provide  a complete view of the garden from the study windows.

There are sunny borders in the garden, filled with many different plants, some spilling over and softening the edge between the path and the garden. 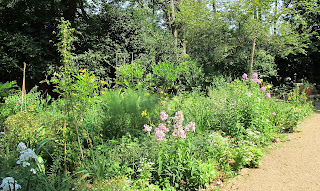 There are shady areas, too.

Deprived northern gardener that I am, I don't recall that I really ever saw Crinum in bloom, but I knew Lawrence had a fondness for them, so I was able to easily spot some in her garden. They weren't at peak bloom, but I can see how pretty they are.
Seeing her garden, I better understand her balance of garden design with her love of plants. Her garden was indeed her plant laboratory.  She took the time and grew the plants so she could understand how they grew, or didn't grow as was sometimes the case, in a Southern garden, her garden, before she wrote about them. That is part of what makes her writings so authentic.

I loved being in this garden, walking along the paths, spotting familiar and unfamiliar plants.  I could imagine what it was like when Lawrence herself was there, how she might lead a guest from one area to the next and then invite them inside to cool off a bit, before sending them on their way with a plant or two to visit the Clarksons just down the street.

I have much more to write about my visit to Elizabeth Lawrence's garden, but will pause here as Garden Bloggers' Bloom Day is this Sunday.  As has been my habit since my first bloom day post in February 2007, I will once again go out to my garden on the 15th of the month to observe what is blooming and compare these blooms with not only my own records from past years, but with many other gardeners who will do the same.

As always,  I will end my bloom day post with the words of Elizabeth Lawrence:  "We can have flowers nearly every month of the year."   These words inspired me to really look at my garden and understand when plants really bloom.  And Lawrence inspired me to share my blooms with others and ask them to share theirs with me because as Lawrence also said, "no one gardens alone".