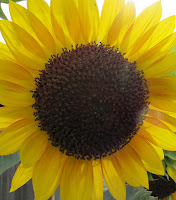 We must warn you that we have many grievances and then at the end we are going to make a Big Announcement.  We are garden fairies, let us get right to our many points.

Blooming radishes! Is it hot or what? We are garden fairies and we have never seen it so hot.  And so dry, too. Records have been broken for high temperatures here in Indianapolis and it has been a zillion days since we have had any rain to speak of.  But would Carol know about those hot days with temperatures in the 100's? Not from actually experiencing them because She Left On Vacation Right As It Got Hot And Missed The Hundred Plus Degree Days.

When we garden fairies found out about this, we were bug-eyed.  And then! And then!  We found out that she stopped in Charlotte, North Carolina on her way to the Outer Banks and saw Elizabeth Lawrence's garden. And she did not take us. She left us here.  She is a crummy bum in our book for doing that.  Really.  How is it that we were not clued in to these plans?  We should have seen the clues!

Apparently, though, Carol found out about the tree falling and she had people come and clean it up before she got home.  We think her sister blabbed it to her but she didn't mention us garden fairies being involved in any way. Woo-wee.

Did we tell you that Carol saw Elizabeth Lawrence's garden without us? She's still all moony-eyed about it and we hear that she has more posts to write about it but only stopped briefly for Garden Bloggers' Bloom Day.   Oh, and she also discovered Cynthia Westcott while she was on vacation.  Geez, another garden writer?  There are rumors that Carol has ordered more of her books to read. Geez.

By the way, we are garden fairies and we know how appreciative Carol is of all the gardeners who post for bloom day. And she is especially appreciative of all the British gardeners who graciously offered to send her some of their rain because they apparently have way more rain than they need, even for England.  She would love to have it because did we garden fairies mention how dry it is here?

We are garden fairies and we have met our quota for this blog post so we are going to stop here and let you all commence with the "Poor Garden Fairies" and other sympathies for all that we have endured so far this summer.

Did you know there is a watering ban, too?  We are garden fairies, we almost forgot to mention that. Now Carol has to hand water anything that gets water around here.  We are garden fairies and are trying to direct Carol where to water but she has her own mind about it.  It sure is boring and sad to have to stand there watering stuff, let us tell you that.   But garden fairies don't cry so that's enough about that sadness.

Sniff.  We'll make our Big Announcement some other day when it is cooler and we've gotten some rain.   We are garden fairies, we are sure it will rain again some day.

You may now commence with the "poor garden fairies".

Submitted by Thorn Goblinfly,
Chief Scribe for the Garden Fairies at May Dreams Gardens

growingagardenindavis said…
I knew you weren't really going to divulge your Big Announcement. You fairies are big teases. And I hear you stole Carol's camera.
Mon Jul 16, 10:53:00 PM 2012

Cindy, MCOK said…
Uh oh, Leslie is calling out Thorn! There could be a rumble in the 'hood!

Dee Nash said…
Sniff. Poor, poor garden fairies. You deserve several of those. So does Carol because she came back and has to water by hand. As do you. My garden fairies in Oklahoma remember last summer. Some of mine needed little oxygen masks because the air was heavy and hot. Let's hope things don't get that desperate there.~~Dee
Tue Jul 17, 09:42:00 AM 2012

Fairegarden said…
Geez! Poor babies and you have it way too rough up there in Indiana. We TN garden fairies are used to heat and drought and being left behind while some people go traipsing off to the beach, too. We feel your pain and wish for cooler and wetter times ahead. All we can say is, thank goodness for Carol's sister. She deserves a prize or something.

Andrea said…
You Garden Fairies should visit us here and see how our dry season from Feb -May feel like. Maybe you wont be complaining of the drought and heat after that! And please tell Carol we miss her posts, and will she please visit my previous post on the Epiphyllum oxypetalum. haha! May you fairies rest in peace!
Tue Jul 17, 11:09:00 PM 2012

Rose said…
You poor garden fairies! I can't believe Carol didn't take you on vacation with her, but she probably was afraid you'd want to stay forever in Elizabeth Lawrence's garden. I'd invite you to visit me, but it's just as darned hot here as in Indy. I'm ready to pack up and find someplace cool to spend the rest of the summer...I'm thinking Antarctica.
Wed Jul 18, 08:38:00 AM 2012