Early Fall is the New Spring

Early Fall is the New Spring.

After three months of the hottest, driest days I've ever experienced as a gardener, we finally had some good rains a few weeks ago and everyone breathed a collective sigh of relief.

Now as August skitters to a close in a few days, we can see that the rain has brought new life to the garden.

Dianthus is blooming, though not quite as fully as in the first Spring which seems like it was so long ago.

I know Dianthus throws out a few blooms this time of year, anyway, but considering that this generally drought-tolerant flower looked like it was ready to pack it up just a month ago makes me appreciate these blooms more fully than even the massive flush of blooms in the spring.

Phlox 'David' had a good run in July, but it didn't last long and I thought that was it for the season.  Turns out, I was wrong. 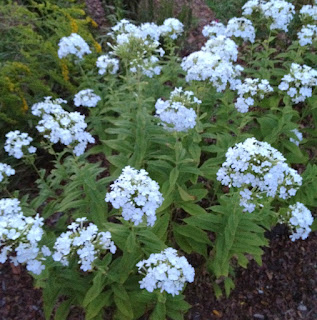 It's blooming better now than before and almost glows at night.

Elsewhere in the garden some Bird's Nest Spruces (Picea sp.) decided to bud out again just like spring. 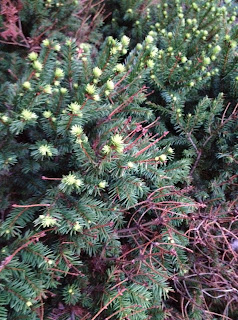 I need to trim back those stems that died and then these shrubs will be as good as new, if slightly mis-shapened. Ah, yes, no one prunes like Mother Nature.

I've also noticed that some Hosta that died back almost completely are sending up some new shoots, as is a Clematis vine that I innocently planted in May not realizing that it would be the hottest, driest three months of my gardening life.

And the lawn. The lawn is back, too, mostly green except for a few places, and calling me to mow it at least once a week.

I love this new spring.  It's full of hope, fully of recovery, full of life.  I know this happens every year at this time, but we don't notice it because it is so subtle, it seems like a continuation of summer.

But in years like this one, when we had the hottest, driest summer I've ever experienced, it stands out like a jewel in a compost bin. It's all shiny and new and begs us to go out and garden with it again.

Robin's Nesting Place said…
My plants that survived the drought have definitely perked up thanks to the cooler weather and rain! It has been a strange year here in Indiana! I'm curious to see what kind of winter we will have.
Mon Aug 27, 12:40:00 AM 2012

Fairegarden said…
It's like the encore performance at a concert, and just as special, the reblooming and new foliage. It does happen every year here, but this year more than ever. What a gift.
Mon Aug 27, 05:35:00 AM 2012

Heidi/ IN Woodland Gardener said…
The orange "ditch" lilies I planted on a very steep rocky hillside 4 years ago died down this summer during the drought and I thought they were lost. Nope! They've come back and I'm wondering if I'll have a 2nd flush of daylilies in Sept! Here's to hoping for some rain from Isaac - for our yards, gardens, and woods!
Mon Aug 27, 08:05:00 AM 2012

AHMSI rip off said…
Great post! I love your photos of these beautiful flowers. I can;t wait till fall comes so I can see all the wonderful changes in my garden. Thanks for sharing this great post!
Mon Aug 27, 10:24:00 AM 2012

Deanne Fortnam said…
Yes indeed, like you, we have lots of things showing beautifully now that it has cooled off and we've gotten some rain. All the Phlox paniculata are gorgeous now and I was surprised to see my Picea 'Bergman's Gem' is also sending out some new growth.
Mon Aug 27, 04:27:00 PM 2012

Commonweeder said…
I am happy to report that while we had 2 inches of rain a month ago we finally had just over an inch last night. a little more is promised. The flowers gardens are SO thirsty!
Tue Aug 28, 09:40:00 AM 2012

Patrick's Garden said…
New spring concept? love it. It's my philosophy plants like your clematis spring back with a vengeance because their life was threatened and now they're ready to spring back to life and make tip for lost ground. What do you think?
Thu Aug 30, 01:21:00 AM 2012

Dee/reddirtramblings said…
It does feel a bit like spring. We've had unseasonably cooler temperatures, and I've enjoyed every minute of them.~~Dee
Thu Aug 30, 10:30:00 AM 2012