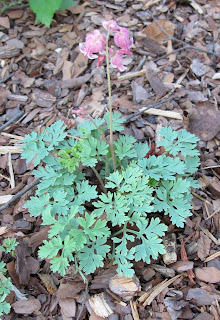 First, what Carol calls "lightly tended" is actually almost completely neglected.  That is what we call it when Carol does not come out into the garden and pull weeds when they are little. She just walks right by them.

Does she want the weeds to grow big so she feels like she has really accomplished something by pulling out a great big weed?  We are garden fairies but that doesn't mean we have any idea about what Carol is thinking, nor do we have control over her.

We can only say that there is a big difference between "lightly tended", which includes some weeding and "completely neglected" which involves doing nothing until the garden is almost lost to the weeds.

The gardens look a lot better now.  We are grateful.  We just hope she doesn't tend this garden like that ever again.  We are garden fairies.  We can't abide by such a thing.  We will not allow it.

Oh, and as garden fairies, we are taking complete responsibility for the new growth and new bloom of that bleeding heart pictured above. Isn't it pretty? We are so very proud of it. We grew that ourselves.  It is near where the redbud tree fell over earlier this summer.  Whew. That was quite a day. Kaboom.  That tree just feel down and Carol wasn't here when it happened.  We would like to repeat, again, that we garden fairies were in no way responsible for that tree falling over.

We garden fairies were pleased though, that even though she was gone, visiting Elizabeth Lawrence's garden without us, harumph, Carol arranged for people to come and take out the fallen tree in a most expeditious manner.

Apparently, whether the garden is "lightly tended" or "completely neglected", Carol is going to make sure that fallen trees are removed quickly. We are garden fairies. We do appreciate this.  Now, we just need her to plant a new tree, or two, where that redbud was.  We think two trees this time.  Maybe three?

Submitted by:
Thorn Goblinfly, Chief Scribe and Keep of the Truth at May Dreams Gardens
fairies humor