Thoughts From the Desert

Two flights with a layover in between and I was transported from Indianapolis in the Midwest, where Fall is lowering the temps and changing the leaf color, to Tucson in the Southwest, where it felt like Summer was a permanent resident.

On the drive from the airport to the hotel in Tucson where the annual Garden Writers Symposium took place, our shuttle van driver patiently answered our questions about the local life of the desert, including rattlesnakes, tarantulas, and scorpions, oh my.

Fortunately for me, I saw none of those critters, but I did see some other insects and birds out and about as we toured both public and private gardens.

There was the butterfly pictured above, coming in for a landing on what I think is Ageratum sp. at Tohono Chul Park in Tucson.

Eventually, the butterfly did rest and sip some nourishment. 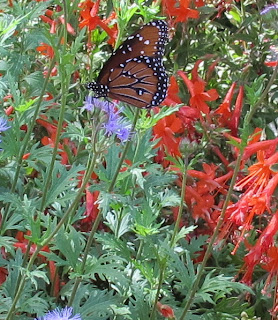 That's something that everyone who attended the symposium had to do at some point. It's go-go-go then rest and drink plenty of water.

At the Tucson Botanical Garden, a grasshopper patiently posed for me. 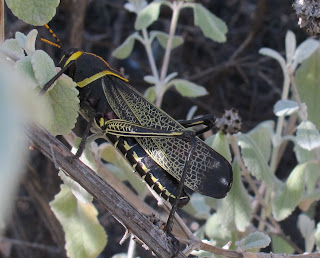 Later, back at Tohono Chul Park, I saw a hummingbird resting. 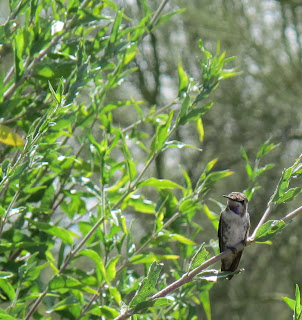 I've never seen a hummingbird just sit and rest like that. That could be because when I'm out in my garden, I'm not usually sitting around and watching for resting hummingbirds or it could be that they don't spend their time resting in Indiana.

This one rested long enough for several of us to take many pictures of it.  It's a good reminder that even the busiest of us must rest at some point.

Resting after the symposium seems like a good idea. I can use the resting time to sort out the ideas and inspiration I absorbed from the people I met, the sessions I attended, and the gardens I saw.  In the days ahead, I will do just that -- rest and reflect on all I learned and experienced.

Oh, and I will also plant some bulbs.  Fall made itself quite at home while I was out of town.  There's no turning up the thermostat now and the days are continuing to get shorter. And I have 1,000 crocus corms to plant out in my back lawn and a few hundred other assorted bulbs to plant here and there.

But you can bet while I'm planting those corms and bulbs, I'll be thinking and pondering about my four days in the desert and all that I learned there.