What did we learn today by planting a Wardian case? 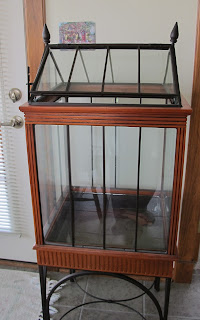 After carefully aging my Wardian case for approximately eight years, I've finally planted something in it.

Well, I can't really explain why it took me eight years to finally plant something in this Wardian case.  I did at one time put a poinsettia in it at Christmas time. I think that was the first winter I had it.  Then I took that out and left it empty.

There were a couple of times in the middle of winter when I thought about planting it but the middle of winter is not the best time to buy houseplants.  Then spring would come and I would go outside to plant and play in the garden and forget about the empty Wardian case.  I did this for eight springs.

Really, I can't explain, but I can announce that I've finally planted up the Wardian case.

Funny thing. I had everything I needed to plant it except for one plant I bought today.

Here's how it all worked out.

The Wardian case can be lifted off the base to allow for easy access.

First I took off the roof. 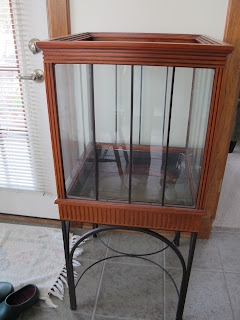 Then I took off the case part. 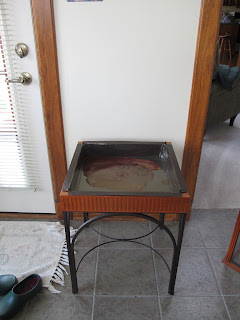 This particular case has a waterproof bottom.

I added a layer of gravel with horticultural charcoal mixed in to the bottom.  Believe it or not, I bought that charcoal eight years ago when I bought the Wardian case.  Before I used the gravel and charcoal, I rinsed both out to cut down on the dust.

Then I potted up some plants in containers and set them on trays in the gravel. 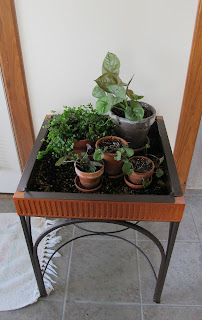 In the upper left corner, I added a pot of Ficus pumila 'Curly Fig'. That's the only plant I purchased today.  In the upper right I placed an Arrowhead plant, Syngonium podophyllum, which was one of the plants in a container sent to us for my mom's funeral, a year ago. I put it in there for height.  Then I added the three pots of Viola labridorica. I dug the viola out of a container outside and divided it amongst three pots, each of which was a different height.

If any of those plants don't make it, and the violas are "iffy", then I can easily pull out that particular plant and replace it with something else.

To finish up the planting, I gathered some rocks from my vast collection of rocks and placed those around the plants, added a little bird next to the arrowhead plant, put the case back together and "ta da".

What did I learn today?

I learned that I have all kinds of stuff around here that I can use to plant up a Wardian Case.

I learned that the Wardian case looks better with plants in it.  I had cleaned up the sunroom a few weeks ago, removing dead plants, repotting other plants, and generally making it more pleasing to be in there. Once I did all that, the Wardian case was like a black hole without plants.

I learned that there is another Viola that might be a better terrarium plant - Viola hederacea, also known as Viola banksii. As soon as I read about this other viola, I googled it and then ordered three of them from Logee's Greenhouse.  According to their website, they will only ship these if the temperatures there and here and at all points in between are such that they don't die enroute due to freezing.  They will arrive when they arrive.

Technically, I didn't learn about the violas from planting the Wardian case. I learned about them from two books I purchased because yes, after decades of gardening I still purchase books about plants and gardening.  The two books are  The New Terrarium  and The Unexpected Houseplant, both by Tovah Martin.  These are the kinds of books that a gardener takes to bed with them to read before falling asleep so that all her dreams are about plants.

Now, enough about what I learned by finally planting my Wardian case. Did you know I have this  large glass cloche that is begging to be used to cover some indoor plants? 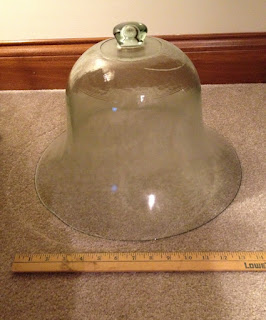 This might pre-date the Wardian case so I think it has aged suitably to be planted now.  I guess the next step is to find a base to plant on that is about 15 inches, maybe 18 inches around.
books houseplants