The Old Woman returns with an apple and advice 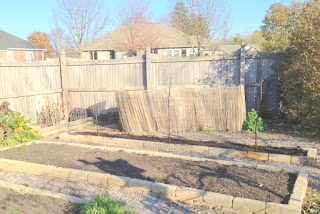 I was startled when the doorbell rang. I was not expecting anyone. My package of dwarf apple trees had already arrived earlier in the afternoon, so I was also not anticipating any more deliveries, especially on a Saturday.

I should not have been surprised to see the Old Woman at the door.  She has an uncanny knack for showing up just as I finish a project in the garden.

For this visit, she was dressed in her usual attire, which I had begun to think came from my own closet. She was wearing old olive green pants and a green long-sleeved t-shirt that didn't quite match, but didn't exactly clash with the pants.  As usual, she invited herself in and sat down next to me. This time she offered me half of an apple, which I politely declined.

I did wonder where she got the apple and thought it quite a coincidence that I had just planted three dwarf apple trees on the east end of the vegetable garden in the last bed by the compost bins, right before she showed up on my doorstep.  This last bed is narrower than the others and I decided late one night that I should plant fruit trees there.  Once I decided that, it didn't take long to find what I wanted online and order them up for fall delivery - 'Gala', 'Goldrush' and 'Enterprise' apple varieties.

"Carol", the old woman said, "I must say this is a good apple. I'm glad you planted those apple trees today".

I wasn't sure how she knew I had just planted those apple trees, unless she had been watching me, but I let her proceed with the conversation.

"I know the conventional wisdom is that apple trees are more trouble than they are worth for most gardeners, but I think that's a bunch of hooey, so I'm glad you planted them anyway.  I know you'll like them.  I say if everyone followed conventional wisdom in the garden all the time they would miss out on a lot of good plants and some good food, too.   I also approve of your raspberries, both the red and the gold varieties.  I don't mind telling you that I may have nipped a few here and there when you weren't looking, but you won't miss them, I promise."

Interesting how she knew about the raspberries, too.

I agreed with her assessment about conventional wisdom and without going overboard, I told her so.   She then went on about the bulbs I planted a few weeks ago and told me how much I would enjoy those blooms in the springs to come and to always find a way to plant bulbs in the fall.    I thanked her for that advice and asked her if she had any other wisdom to share with me.

"Blueberries", she said. "You really should plant some blueberries.  I know that they need more acidic soil than you have, but I think if you plant them along the back fence in the vegetable garden, you'll figure out a way to provide them with the conditions they need."

Well, I had wanted to use that bed for clematis vines and other flowers, but maybe I could find a spot for a few blueberry bushes, too?

Just as I began to think more about getting some blueberries to plant, The Old Woman got up and said she had to go see about making a list of more conventional wisdom for me to ignore.  "After all, I wouldn't want you to go all stale in the garden, following a bunch of conventional wisdom that may just be someone else's limitation and not your own".

She left as quickly as she came and I was left wondering just where she got that apple, wondering if she had been here at all.