And then it bloomed

My plan was to cut down the large Korean Spice Viburnum (Viburnum carlesii) on the right side of the gate.

Then I would move the much smaller Korean Spice Viburnum on the left side of the gate to another location in the garden.


After all, the larger viburnum has a big dead branch in it, and it's getting on in years. 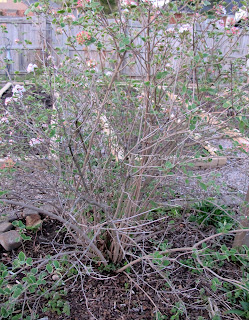 Plus, I have two honeyberries, Lonicera caerulea, growing in one gallon pots on the front porch that I want to plant where these two viburnum are currently growing.

Honeyberries, which should get to 3' - 4', maybe 8' tall, produce edible blue berries which are supposed to be similar to blueberries.

When I read about honeyberries this winter, I immediately thought of planting them on each side of the gate since the gate is the official entrance to the vegetable garden.  I dreamed of them joining the raspberries and grapes that form a living fence separating the vegetable garden from the rest of the garden, and providing me with food. I could just imagine a visitor  seeing these shrubs loaded down with blue berries and asking "What's that? Then I would invite them to try one. "Mmm", they would say in my dream, "those are good."

But then, guess what? 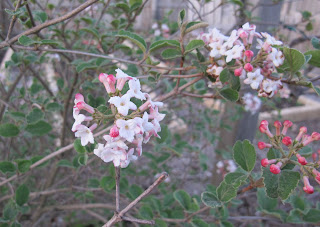 I tried not to lean in and smell it, I tried to show restraint, I tried to hold myself back. But I couldn't resist.

I leaned in slowly, sniffed a tiny bit, closed my eyes, then drew in a big breath of Viburnum carlesii and decided right then and there that I am going to cut out that dead branch, trim the whole shrub back a bit after it blooms, put a nice layer of mulch over its roots and make sure it gets some good organic fertilizer.  I'll do the same for its little buddy on the other side of the gate which has struggled through two droughty summers since it was planted. They'll be fine. I won't get edible berries from them, but I will get lovely sweet-flowers in the spring, food for the winter weary soul.

Those honeyberries?  Well, I think there is room elsewhere in the vegetable garden for them, in the corners. They are pollinated by bees so I hope the bees don't mind buzzing one and and then going 60 feet over to the other one so I get some berries.

(Apologies for the pictures... I took them just before dusk...)